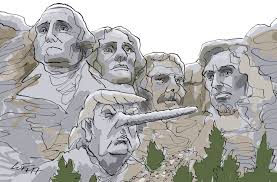 Four years ago I visited a friend in Florida for a couple of weeks and I wasn't aware that during these days something happened I didn't expected. I remember when we sat together day day before election and discussing how the first woman in American history will govern the country sure that Hillary Clinton will win this election. What we saw on television next morning we couldn't believe. The blockhead won and we asked how this could happen. Surely not only because he always repeated 'Make America great again' or the hatred against Mexican immigrants. Probably because he played himself to the gallery as the one and only leader in the world. Since four years he hired and fired staff, ruled his country like a business man without the ability to compromise, set the world nearly on fire and ignored the pandemic. Donald Trump showed the world what he is - an arrogant prig preaching 'Trump first'. I hope that the Americans will correct this mistake in history today. Many artists opposed Trump to use their music and here are some examples.

Tom Petty - I won't back down

Panic! At The Disco - High Hopes