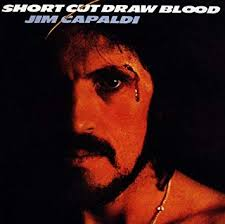 As I was searching in my vinyl collection for something old by Traffic I found the first album by their drummer Jim Capalidi. I really forgot about this album and have to admit that I really can't remember why I bought this. Short Cut Draw Blood is no groundbreaking album or one you bought while it was the biggest thing in 1975. Probably because Traffic was a band I liked much at these days. Listening to Capaldi's songs after almost 50 years I have to say that he wrote some superb songs with the assistance of a bunch of great session musicians. Finally it was a good choice going back with my memories for times long gone by.

Jim Capaldi - Living On A Marble 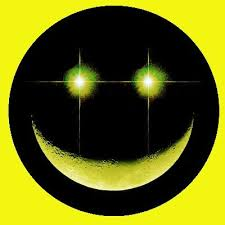 British electronic pop-rockers Django Django released their latest album a few weeks ago and they added to their psychedelic and krautrock inspired roots more ingredients of pop. Not that it is bad - it is still a search their very own sound. Their feastful synthie-sounds and hypnotic drum-loops sounds like Phoenix or Hot Chip at their best. This remix is one of those I will come back from time to time. 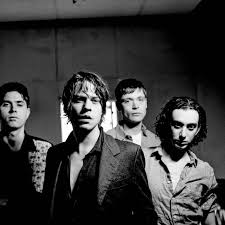 Copenhagen's post-punk band announced the release of their new album for May this year and released the first single Vendetta. And this songs makes me want to have some more of this fascinating little band. It electrifies me with blustering electronic beats, sharp guitar riffs and haunting vocals. One of the best new songs from this genre I listened to during the last weeks.
Eingestellt von Walter um 05:33 Keine Kommentare: 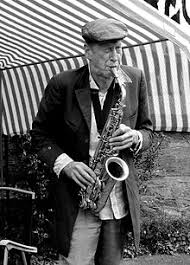 In 2017 a project started in Glastenbury when former Hawkwind member Nic Turner was invited to create a jam session with bass player and producer Youth. The result was a kosmische trip in psychedelic space with the leading saxophone of Turner. A few years later they found together again to do another jams in a studio in London to reproduce their live sound. The result is a freaked out psychedelic trip into space remembering the old days of krautrock. 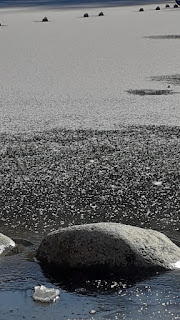 Sometimes a song needs a remix to make it something special. This happened with the remix of Ron Gallo's single from last year You are enough. In it's original it was another song by a singer/songwriter about his personal depression Gallo's label-mate Caroline Rose re-imagines the track as a pulsing banger. Thick techno beats and heavily distorted vocals form a hypnotic club reverie. It’s a darker turn, but one that ends up equally uplifting in its own insular way. Surly not everyone's cup of tea but for me one of the better electronic tracks this year so far. 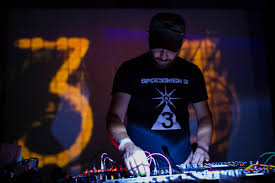 Pye Corner Audio is name of the electronic music project by Martin Jenkins probably known for his superb remix of Andy Bell's Cherry Cola from last year and supporting Mogwai on tour a few years ago. His music meandering form of buzzing synths crawling around before steady bass-thumps emerges out of the thicket of noise. It all exists together in the space between dance music and a soundtrack of movie with endless skies. I really like this pulsing little gem that makes the start into a new working day much easier. 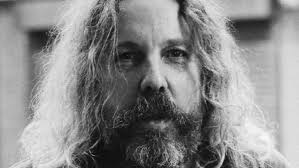 One year ago we were all shocked by the sudden death of the probably best DJ in the world. Since then I spent a lot of times listening to the songs and remixes by Andrew Weatherall and I have to admit that I miss him and his monthly shows on NTS introducing new and excellent stuff to me. I asked myself several times if there are existing some hidden remixes somewhere in the attic that will be released one day. Yesterday I got the news that A Man Called Adam released a song to commemorate the 1st anniversary of his death. This latin based song is a charity project for Thrombosis UK, a project supported by Andrew Weatherall and you can get it here.

Steve Jones wrote some words about this track:

Many years ago we spent a night in a shitty hotel room in Coventry (The Godiva), laughing and talking with Andrew, and that night he specifically asked if he could remix our song The Chrono Psionic Interface. It’s a wonderful mix that sounds as fresh and brilliantly Weatherall as it did the first time we heard it.

Kombynat Robotron announced the release of a new vinyl for the next weeks. I featured them in this series once and I am looking forward to this release. KR are a band holding up the flag of krautrock very high. Their music is more or less the result of long improvised jams with guitar feedbacks, wah-wah-guitar and mostly without a lead vocal. This sound is so old but still innovative and are as good as many of Scandinavian bands playing on the same ground. 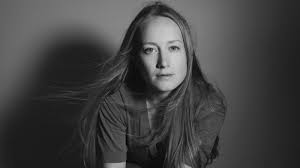 The Weather Station, the indie-folk band by Toronto based singer Tamara Lindeman released their fourth album a few weeks ago filled with songs I can't allocate to simple genre. Based on a floor of skittering drums, keyboards, a saxophone and a reluctant guitar she sings with a voice that reminds me on Joni Mitchell. It is one of those little gems that come unexpected to your ears and the more you listen to their superb songs the more details you will find in them. An album I will come back for several times during the next time. 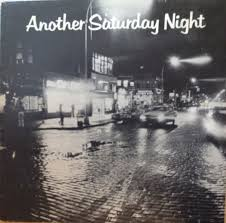 Since a few weeks there is running an excellent series on Saturday over at CC's place about Saturday Night songs. Last weekend CC posted the picture of an album he never knew before but was corresponding to the series theme. It was the picture sleeve of a sampler originally released in 1974 compiling songs from the Louisiana Cajun scene I owned decades ago. I can't explain why I bought it because it is not the kind of music I listen very often to. Maybe because it was cheap and I knew some of the songs from other artists. Anyway, I can remember that I used to play it often especially the songs with accordion in it. I picked this record out last weekend and have to say that I enjoyed the freshness of the sound and the fun the artist had recording them. Most of them has their roots in country and early R 'n' R but this is more a compliment than a critic. This is also a brief survey of the early sound swamp rock. Enjoy.

Richard Belton - I am a lonesome fugitive 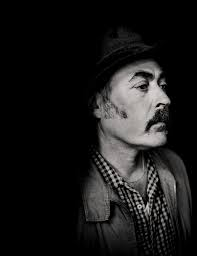 Stuart Staples announced from Nottingham based band Tindersticks the release of a new album called Distraction. The album will contain a few new songs and some cover versions from Neil Young and Television Personalities. The leading song Man Alone is the longest song Tindersticks ever recorded as far as I know and I only can say it is a beautiful one (for one that isn't a huge fan of the band). With a throbbing and repetitive bassline, there's an almost trance-like vibe to it, dark and hypnotic. Sometimes it sounds like a journey through a dark and rainy night and full of ideas and breaks. Certainly one of the best songs this year and one I never expected from this band. 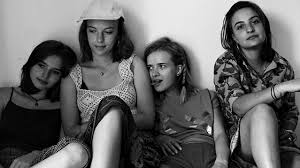 South London based band Goat Girls released their new album a few days ago. Like their first one three years ago it is worth to give a listen. While post-punk and rough guitars ruled the sound now they added some synths and a pop-flair to their imagination of today's indie-sound. When I listen to Babadiba The Breeders, Elastica or The Slits come to my mind. Not because of a nostalgia feeling more because of their nonchalance in using post-punk and indie fragments and creating their own sound. Seems like a revival of new generation of guitar will come this year. Fontaines D.C. and Goat Girl are part of it.Goat

The Stars We Are 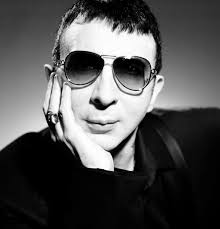 A few days ago I read the news that Marc Almond will release an extended version of his 1988 classic The Stars We Are. For this reason I grabbed out my original and played once again after ages. I think I don't have to say much about Marc Almond because most of you will know him, if only for his work with Soft Cell. And I can say that I really enjoyed listening to this once again. The album was high in the charts when it was released and it seems like an almost perfect pop album. Away from the synth-pop of Soft Cell and the cover version he did with Matt Johnson as Marc and the Mambas he added orchestral sounds to his songs that make the songs brighter. This album shows also his talent in songwriting and choosing excellent duet partners. Your Kisses Burn is still a highlight not only because it was one of the last performances by German chanteuse Nico.

Marc Almond - These My Dreams Are Yours 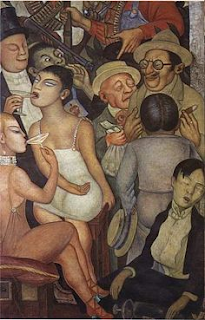 Three years ago English musician, producer and songwriter Mark Peters released his first album Innerland his interpretation of a native or resident of Lancashire. Eight instrumentals I can't more than describe them as beautiful tracks somehow between late Talk Talk, The Durutti Column and minimal Brian Eno. I got aware of him because of his collaborations with Ulrich Schnauss and found this record on my hard drive a few days ago. It is one of those records you owe, listen, enjoy and forget until the time has come to see the beauty in the songs.

2019 he released a remix version of the album called New Routes Out Of Innerland showing that this songs work on a funky or Balearic style as well. 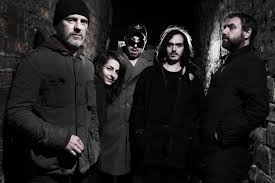 As Swiss Adam mentioned last Saturday Meatraffle one of the most innovative London bands during the last years are going to release a remix-EP of Abstinence Blues a song from their last year's EP. This song was also remixed by MixHell who also made the remix of Meatraffle on the Moon. And still another great remix of a song that starts slow with a pumping bass waiting for distorted vocals taking over the rhythm. Another very fine piece of music 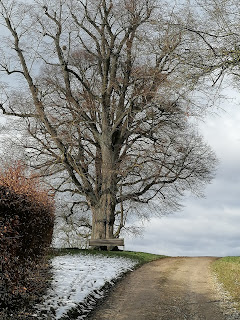 Belgium seems to be one of the best places in new music these days with a vivid and vibrant music scene especially for electronic music in many variations. Ghent music label is going to release Berlin based producer and DJ Luca Musto's first full album in a few weeks. The leading single Toledo was released in advance a few days ago and it is a splendid hybrid of electronic beats and hip hop. The hypnotic groove made listen a few times to this song.