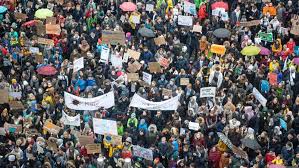 It is not the first time almost forgotten bands brings back memories of times long gone by when they release a new album. Most o the times it are just memories because I compare their latest record with their former releases and sadly I have to admit that they could'r reach their level from former times. These days Blackpool's post-punk band The Membranes released a double album What Natures Gives ... Nature Takes Away and I have to say that John Robb is still an angry man and he makes no compromises in his music. Their sound is a conglomerate of brute pros-punk, guitar noise and sometimes dub sequences and always led by a deep bass. The concept of the album is to shout out how we are going to ruin our planet. Listening to the anger in the songs the Friday-For-Future movement seems to be a kindergarden but still necessary.

A Life Of Silence


While I am typing these words I watch the second semi final of UEFA 21 EM Spain against France after the German team got the final on Sunday after a win against Romania. It wasn't the best game of the Germans but successful in the second half. The Romanian's were lucky enough to reach the semi final because the English team didn't have the fortune against Romania in the group stage. Anyway, in my opinion the Spanish team that lead now 3:1 might be better than my team. But we will see what happens on Sunday. Today's track is an old track by Scott Fraser that I remembered a few days ago. Easy synths over a steady slow groove with accentuated peaks makes this song well worth to listen after many years.


Another obscure artist/record came to my ears the recent days. Georgia Anne Muldrow released her latest album VWETO II a few days ago. She released more than 15 records during the last decade and I ask myself why I didn't noticed her since yet. The net tells me that she is well known for her voice but I can't agree because this album is filled with instrumentals. VWETO is a synonym for gravity and this describes her sound very well. It is a conglomerate of soulful synthie sound with a deep bass, 70's funk, jazz and a bit of George Clinton. Seldom heard a record like this that was relaxed like this.


If you are want to hear her voice you can choose this:


It was often said on this pages that 1979 was a great year of music and I can only agree to it. The list of bands/songs that could be featured is almost endless. But one band came to my appearance that is still one of those that I will always come back to. Talking Heads released Fear and it was one of those albums that was played on heavy rotation at my place.And their combination of funky basslines, fantastic guitar phrase and the voice of David Byrne made this song timeless and it is still a great pleasure to listen to them.


Six years ago Kopenhagen born DJ Peder Petersen released his first EP. The kind of way he mixed house and ambient to an unique sound is still superb. Starting with strange metallic sounds he drifts into a steady groove. A little forgotten gem of this genre.


CamelPhat from Liverpool made for their latest record a collaboration with singer/songwriter Jake Bugg and the result is a fine track for this summer. Both DJ/producer Dave Whelan and Mike Di Scala made a bass driven house track with a melodic hook. Even Jake Bugg can't destroy this song.


As I turned into 60 four weeks ago my working colleges surprised me with a gift I never expected. They know very well that I am some kind of music maniac and they agreed to take me out for a concert. When I was surprised that they did it, the more I was surprised what band they found. It was UFO, an English band formed in the late 60's and well known for their groundbreaking hard rock and heavy metal. It was a band I knew well in my younger days but I have to admit that I forgot them during the last decades. So I grabbed out the old records and listened once again  to their songs and I have to say that they work well, even it is not the music that I usually listen to. Michael Schenker, a former member of German hard rock band Scorpions made the difference on guitar. He was probably the best guitar player in this genre at these days. UFO started with cover songs beside their own songs and turned with their second record into psychedelic spheres (maybe more next Monday). In the early 70's they were very big in Japan and they released a superb live recording called UFO Landed In Tokyo. So last Monday four guys and everyone crossed the border 60 went to the gig and weren't surprised that we see young folks. UFO played what many people would like to hear but for they should have played more songs from their early days. Nevertheless they have still power and Phil Mogg's voice is still firm. After all the concert made fun and we all had a wonderful evening out.

Nothing Is Older Than Yesterday

I am back from the festival in Mannheim and at work since Monday and I am glad that there is a bank holiday today to recreate from three days standing around and watching bands. Me legs still hurt and I making minds to do this another time. Anyway, there is another band their live appearance impressed me much. Cari Cari is a two piece garage band from Austria and almost featured at these pages about ten months ago. They claim to have founded the band to get their music into a Tarantino film. And I can imagine that their songs could work as a soundtrack from Trantino. Their sound is a mixture of surf twang, Morricone and garage. Music the White Stripes would play if they are still on duty.


That they learned their musical history you could see in this video:

Monday's Not Too Long Song 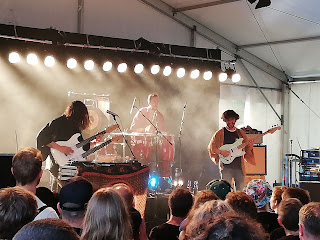 After three days spending my time watching well know and truely unknown band I try to recall what band is worth to investigate for more. Arriving on Friday the first bands wasn't worth to name because they were not good on my opinion. But the first band that impressed me very much was Yin Yin from Netherlands. They played in a small and crowded tent were you had to sweat even close to the entrance. But is was worth to see their extensive live show. The music is hardly to describe but probably like Hawkwind meets Funk meets dicso. All based on a funky bass line, steady drums and bongos to create space for improvisations on guitar and synths. I searched for some music and I have sadly to admit that the studio recordings don't come close to their live appearance. The best I found was this live session. 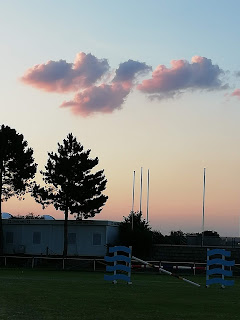 Today I only have to work after lunchtime and then I am moving to Mannheim for the annual festival until Sunday. It will be the last one for minimum one year because it is too stressful to organize and they need a break. So I will look forward to watch Sleafid Mods, The Streets, Teenage Fanclub, The Twiglight Sad, HVOB, Mavi Phoenix and many others.

If You Will Fall


Psychedelic music seems to be a worldwide phenomenon because a lot of bands in Europe and also in the United States are playing a variety of this sound. Therefore it is no surprise that it is played in Italy as well. Juju is the project by Sicily based musician Gioele Valenti and signed by London based label Fuzz Club. If bands from Scandinavia play this music in a rough way with longer improvisation parts Juju play their music in a milder but not less interesting way.