A new week with lot of work ahead but also a few weeks off from Saturday on. Looking forward for the days in Florida visiting an old friend of mine. Not knowing what he has planed for the time we spent the time together but I am sure we will have a great time hanging around together. In the meantime I spent the time listening to former Hüsker Dü frontman Bob Mould and his latest record Patch The Sky. In my opinion one of the best rock records of this year. It's a record with a dark atmosphere but full of energy. A record full of straight guitar sounds and songs with magnificent refrains and blurred chords. No empty phrases, no circumlocutions and no platitudes. Great the more you listen to it.

Shut Up Kiss Me

I was two days off duty and got myself an easy time to recreate. Nothing to do than relax and give myself a favour. Spending two days cruising my home town and having some good talks to friends I didn't see for weeks. Also had a great treatment by my sister in law. She relaxed my hardening in my shoulders. It was no nice treatment - it was painful as every time but it healed my pains. Now I am watching the highlights of German football cup hoping my team won't loose too high.

Angel Olsen released a record this year that was far over the average in their genre. Gentle songs with a great voice made for the times later at the day. I got this record a few month ago and it grows the more I listen to it. 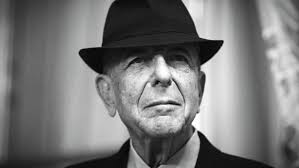 There were song I know for ages and they appear to my ears from time to time and I feel save and glad listening to it. Some songs are for eternity and this one is one of them. Leonard Cohen wrote it more than 30 years ago and it is a song I love in many versions by now. All in all a simple song with a short message but I think that this message a lot of musicians inspired to make their very own and unique version about. For me almost version has it's own own genuine. This might be one of these songs that could me take to my grave (hopefully a very long time from here).

Now I've heard there was a secret chord
That David played, and it pleased the Lord
But you dont really care for music, do you?
It goes like this, the fourth, the fifth
The minor falls, the major lifts
The baffled king composing Hallelujah

Your faith was strong but you needed proof
You saw her bathing on the roof
Her beauty and the moonlight overthrew her
She tied you to a kitchen chair
She broke your throne, and she cut your hair
And from your lips she drew the Hallelujah

Maybe I've been here before
I know this room, I've walked this floor
I used to live alone before I knew you
I've seen your flag on the marble arch
love is not a victory march
Its a cold and its a broken Hallelujah

You say I took the Name in vain
I dont even know the Name
But if I did, well really, what's it to you?
There's a blaze of light in every word
It doesnt matter which you heard
The holy or the broken Hallelujah

And this version is by the master himself eight years ago in Montreaux:


Thinking about new Austrian Music I associate to a new definition of electronic music, electric singer/songwriter or minimal guitar based rock music. I don't think about classic rock or grunge - these were words I wrote a few month's ago when The Crispies released their first song Bad Blood. Now another song from their new album was released. Four young men from Vienna indulge there in the good old rock'n'roll, the garage, the beer can charm, the sexily rebellion attitude. The advance single "Noose ' N Go" still throws a well-arranged touch of a Krautrock psychedelic in addition - a hypnotic grooving, a hit which fits in the shelve also well between Horrors and Primal Scream.


I heard River by Bishop Briggs the recent days and thought by myself another great voice and started some investigations about her. There were less informations on the internet and that is what I found. Bishop Briggs is the stage of Sarah Grace MacLaughlin, born in London and now based in Los Angeles. Her parents were Scottish from Bishopbriggs what inspired her for the stage name. Moving in her younger days to Tokyo were she started to sing in karaoke bars. After graduading in Hong Kong she moved to Los Angeles to force her musical career. She released a few singles so far but all I heard from her is worth to listen. All songs are played in a downtempo style where guitar, bass and drum are in the background to feature her powerful voice.

Have a great Sunday.


Thank god it's Friday and working week almost over. I don't want to start moaning but working these days is difficult. On the one hand there is the worst corporate merger that happened to my business life because there were no plans to manage the things that have to be done. On the other hand there are a lot of new adjustments from Brussels that should be implemented this year. But now it's weekend and I will support my team early in the evening hoping they are playing better than on this disaster last week.

Today's song is from the Montreal based punk rock/electric punk band Duchess Says. They describe their sound 'moog rock'. If you can't imagine their sound think of a deep played bass, synths, guitar, drums and female vocals. This song is a six-minute trance like built that erupts in deeply satisfying crash of all instruments/vocals.


Back in 1974 Al Green recorded Take Me To The River a classic downtempo soul song. Some people recognized this one as a good song and played it like many others of Al Green. In 1978 Talking Heads made this cover on their second record More Songs About Buildings And Fruit. It was one those songs for me that combined classic soul music with  intelligent pop music and some NY-based punk influences. David Byrne once wrote about this song:

"Coincidence or conspiracy? There were at least four cover versions of this song out at the same time: Foghat, Bryan Ferry, Levon Helm, and us. More money for Mr Green's full gospel tabernacle church, I suppose. A song that combines teenage lust with baptism. Not equates, you understand, but throws them in the same stew, at least. A potent blend. All praise the mighty spurtin' Jesus."

Another cover version that is better than the original.

Talking Heads - Take Me To The River


This was a dismal weekend for football fans in our region. First our team in the second league was slaughtered in Dresden 5:0 and even this result was correct. No inspiration or compact playing on this early Saturday game left us disappointed looking forward to the next game on Friday evening. On Sunday I took a longer walk because it was another warm and sunny day and I passed our stadium. I forgot that there was a local derby in a very low league. So I decided shortly to watch the team I played in my very younger times. I didn't saw them but also follow their results on the Monday's papers. It was a good game for this league and as all thought it was tie our team made an own goal for the  final result for 2:3. All in all not the best weekend for my team but anyway worth to support them in the future.

I don't know why but after these games I watched it bound me to a music I didn't listen often in the last month. A few days ago I recognized that Maid Of Ace released a new record called Maid In England (what a name for a record in these days). Maid Of Ace is another English punk influenced band, living the true spirit of punk and independent music. The best thing about them is, that they don't see them as a tit 'n' ass chick band or forcing the feminist way of the Rrrrt grls. They play hard, fast and dirty. No big messages - just a bit of rebellion, living right now and having fun. I really like these ladies - hope you enjoy as well.