Today just a few words because I am too tired to lose more words about a forgotten song by a forgotten band. Catch My Drift by AR Kane is one of those I found on my hard drive a few days ago. AR Kane were a British independent duo and one of the pioneers that combined different sources like dub, psychedelia, jazz and house in the mid 80's and gave us Andrew Weatherall's A Love From Outer Space. This one is also a dubby reggae influenced little piece of magic.


Suicide's song from 1977 was one of those from their debut album that lasted since then in my memory. The song tells another story about poverty about a young father and factory worker who is not able to feed his family and he comes home, murders his wife and child to commit suicide. It is a story we Europeans heard many times in songs by black blues musicians and sometimes really great by new bands like Violent Femmes. I really like the output by Suicide and Alan Vega but in this song they transformed the inescapable end into a proto-punk inspired sound that hurts by every word and phrase Vega sung. For me a monument of song that prepared the ground for next generations.


The more I listen to new music the more I think by myself I heard this long time before. Of course there are artists that try new things or experimentalize on new sounds. But this is mostly in the electronic scene - most of the indie influenced bands try to copy popular sounds from times ago. I presume that the record company leads them to - probably to start a reunion of the sound with their band in front of the revival. These days a lot of bands are appear on the scene trying to copy the sound of the first shoegaze bands like Slowdive, Ride or MBV and it often that I skip the song after one minute. But sometimes you will find a nugget in new releases. So was Swebeacb, a song by Westkust, a band from Gothenburg, Sweden. Massive distorted guitars as the floor for Julia Bjernelind's voice makes this song sounding like an outtake from an early session by Ride


During the past weeks I have pursued many games of the handball world championship. Not only because the German team was very successful in this tournament but because the game fascinated me in itself. Compared to football it is faster, more body-emphatically and exciting. Most of the games I watched were very close and often the one will win that have a bit more luck. Yesterday the dream of the German team for winning the competition died by a very strong and effective team of Norway. Congrats to them and to our team because they played with full passion. After watching the game I switched to a French-German cultural canal ARTE because since a few weeks there was series running about the moon to celebrate the 50th anniversary of the first landing on the moon. The series running with movies, documentaries and cultural relations according to the main theme moon. Yesterday's feature was about how the moon captured pop/rock music. Watching this collage of music, animated clips and time-historical archive material I thought by myself that music history is full of songs linked to the moon and space. Here are some songs that was featured in this documentary and probably this could be the start of a new series.


These days I got the news that North Lanarkshire band The Twilight Sad released their fifth album It Won't Be Like This All The Time. I discovered them six years ago when they released their third album No One Can Ever Know when Andrew Weatherall assisted producing the album. Their first albums weren't bad but they didn't fascinated me much because they hadn't found their own style and sounded just like another indie-band at these days. I like their later records because the songs and the sound were more attractive to me. There is nothing really new in their sound but a bit more impassioned. They still have throbbing basslines their epic post-punk stretches from The Cure to The Chameleons to White Lies. All in all a record I will listen to several times the next weeks. And I am proud to say to meet James in November at Simply Thrilled. Looking forward to see them in June.


Almost at the same time Pigbag appeared on the scene a British musical ensemble made the sound of the summer for many at my place. Blue Rondo A La Turk, named after a song by Dave Brubeck, were a musical collective whose music featured elements of salsa, pop and cool jazz. They had their time for a short period and vanished as soon as they appeared after a few members left to form Matt Bianco. Not a music I would like to listen often to but it brings back memories of this year.


And in addition a footage from a live performance in German TV from 1982 that shows their live presence and their ability to fascinate the audience. I was lucky enough to be part of this show with a couple of friends.

Papa's Got A Brand New Pigbag


Inspired by yesterday's post I grabbed deeper in my old records for some music I didn't listen to for ages and found a 12-inch and an album by Pigbag. Formed by Simon Underwood when he left post-punk legend The Pop Group in 1980. If The Pop Group was named as a crossover band Pigbag absorbed more styles and genres into their unique sound. It was courageous by them as a band that had heavy influences by punk to include funk and horns to their sound. But it worked very well and Papa's Got A Brand New Pigbag became a trademark to their sound. Apparently they hit with their percussive tribal power the nerve of the time and the song reached high positions in the charts. Also at my place many of the jazz addicted people could agree to them and this song was played by many DJ's in the early 80's. Probably one of the first independent dance track and still heard in clubs today.


The song is based on a song James Brown recorded in the early 60's and also worth to listen after a long time. 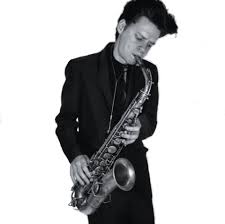 A few days ago I met an old friend for a couple of beers and we remembered once again when we were DJ-ing in the early 80's in our local pub. Later this evening we talked about our friends who passed during the last decade. One of them who passed too early in a motorcycle accident was Peter who was addicted to Frank Zappa. He was the one who introduced us to the so called No New York sound. It was Brian Eno who was one of the first that discovered this sound. It was a sound that was very new to us all. A lot of free-jazz on a perfect and steady rhythm groove made it more than worth to listen to. In these days we listened to James Chance, Defunkt and many others funk and jazz inspired bands. Some might call it eclectic but after decades nothing of this music lost of it's fascination.


It is 40 years ago when I first got contact to new black music. Sugarhill Gang and rap was new to me and many friends of mine in these days. Most of had had problems with new fantastic music swapping over from Great Britain and no ears for Rapper's Delight. For me it was a little miracle that in NYC is growing something new and spectacular. Looking back in history, this song may opened many ears for following artists like Grandmaster Flash and the Beastie Boys as well. A classic tune, worth be featured at this place as well.


A few days ago Santigold's new single came to my ears and I can't get it out of my head. Santigold 's records got many critical acclaim during the last decade but I couldn't agree to them. The more I am astonished that she made a tempting little piece of  Dancehall-pop song. Perfect for a easy start into Sunday.