The Comfort Of Madness


Probably the best you can say about anniversary albums is, that they bring back memories of almost forgotten bands. So it happened when I got the news that Pale Saints' album from 1990 was released with additional material. Pale Saints were one of those bands that transported the C86-sound into the new decade. Powerful songs with great harmonies ruled the album and made it to one of the best albums of this year. Good to remember them again. 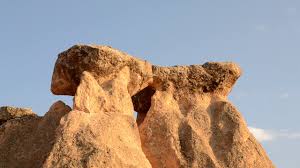 White Heron is the name of the latest release by Amsterdam based musician Ruben Üvez aka Konduku. The music is based on a dominant bass-line and a combination of loops, synthesizer snippets over seductive rhythms. White Heron is one of those rare albums you could listen to from beginning to the end and if you agree with the rhythms you might get lost in trance.


During the week I got a lot of inbound e-mails and mostly promotion material. Usually I delete them unread but sometimes I take the time to read the headlines and open the e-mail if I am interested in the content. This happened when I got promotion material by an Oslo-based band named Mayflower Madam. I've never heard of them before but wanted to know what is behind the headline Joy Division influenced psychedelic post-punk. What I heard was Vultures the first single of their upcoming album. The song is a hybrid of JAMJ-riffs added with the echo sound of early Sisters of Mercy and bit of Krautrock. Surely one of the better songs released this year.

In 1973 Roxy Music released their second album For Your Pleasure and another album with a great artwork. As known from their first album another model on the cover. What makes this cover special was the artwork with Brian Ferry's then girlfriend Amanda Lear in front of a skyline at night with a black panther at the leach. I knew Roxy Music from their debut and I bought this album without listening to one song. The music is different to their debut and only Do The Strand is like their first successful appearance. Now they had more time and equipment to create a sound that was included by Can and the slower songs are radical new and far away what they called a song in these days. 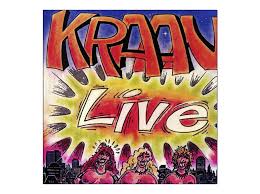 Kraan were a band that was very popular in the early 70's. Formed in 1970 in Ulm, Southern Germany by Hellmut Hattler and Peter Wolbrandt. They have their roots in late 60's krautrock scene and included pieces of rock and jazz/fusion to their sound. Dominated by Hattler's excessive bass lines that sometimes went to duel with Wolbrandt's guitar. All under a steady flowing rhythms. This song is from a double live album from 1973 that is still played sometimes at my home.


A few days ago the news arrived that Oliver Maurmann aka Guz died at the age of 52 waiting for a new heart to get engrafted. Guz  was the lead singer and songwriter of a former punk band from the early 90' based in Schaffhausen, Switzerland. They soon left their roots and tried to do something different. They included Rockabilly, pop, garage-rock and soul (especially horns) into their sound and started singing in German. They soon got part of the so called Hamburg school that was famous for their new interpretation of guitar music. 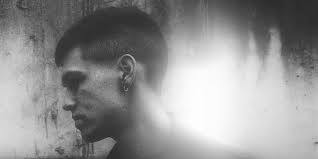 The techno club Berghain in Berlin is known as a hotspot for international nightlife and New York-reared and Berlin-based Phase Fatale (aka Hayden Payne). The resident DJ at the club is known for mixing techno with industrial, EBM and post-punk. Now Payne released a record where he celebrates his very own version of industrial techno. Binding by Oath has a motorik synthline over a thundering stomp and made me investigate for more. When I have looked some days ago in my bookshelf for something, I discovered a book I didn't knew that I still own it. Album Cover Album was released by Storm Thorgerson's Hipgnosis and it is a review of classic album designs from the 50's to the mid 70's and had the size of a regular LP. When I riffled through the book I remembered when I browsed through the boxes in record stores and an album cover attracted my attention and made me curious how the music will sound. Often the cover has decisively influenced my purchase decision. This happened by the pictured album above by Fumble a British Rock 'n' Roll band. They released this self titled album back in 1972 and it is filled with cover versions from the 60's. They were as a cover band rather good but who needs them you can listen to the originals? And I have to admit that I didn't listen much to this record but the cover is fantastic. Probably I will start a series about albums with great covers.


Another forgotten band from the early 80's is Bristol based post-punk band Maximum Joy. I remembered them a the recent days when I listened to Silent Dub again after a very long time. Someone described their music as The Slits backed with Gang Of Four and this wasn't totally wrong because it is female vocals over a fantastic bass lines, complex percussion and some horns. And I have to admit that I forgot them by releases of many other bands in this decade and after. But listening to their songs feels like a time travel back into the days when real music was made and a lot of people had open ears for new sounds.


In the early 80's Berlin based all-female post-punk band entered the independent stage with a sound radical and new for a German band. Many people named them as the German answer to The Slits and The Raincoats but for me they built the ground for many following new wave bands in Germany. Malaria! didn't only made their post-punk thing, they also adapted early electronic sounds and No Wave like James Chance to their music. All in all not an easy listening because it was more than new to many but retrospective a band that showed us the possibilities of modern music.

Malaria! - How Do You Like My New Dog
Malaria! - Pernod
Malaria! - Your Turn To Run
Eingestellt von Walter um 06:04 Keine Kommentare:


Sometimes it needs a short news I got aware to return to a very old album that I didn't listen for a long time. This happened when I read that Graham Parker is going to release another live album and I remembered his fantastic debut album from 1976. Probably the last record that could be filed under pub rock and the one of the last that was ruled by great songs and arrangements in the tradition of blues-rock/song-writing. It was one of those albums in these days many people could agree with. After all it makes fun to listen to those songs from another era.


Last October 10 000 Russos, a band from Porto, Portugal, released their latest album Kompromat. I never featured any track by an Portugal band or artist since a started this blog and didn't even know that there was a scene for this kind of music. Their music is based on teutonic and motoric sound added with fuzzy guitars and melodies. Some might say that they are just another noisy bastards but bastards I really enjoy to listen to. And sometimes when I listen to their songs I think by myself some of these songs could work on a dancefloor in outer space.


A few days ago I got the news that Alex Crossan aka Mura Masa a electronic producer and songwriter from Guernsey will release a new album. I liked his first one a few years ago because his sound you couldn't really catch. It was a mixture of currently hip music combined with African and world music. So I looked forward if he continues his work or if I get something different. And he didn't made the mistake to copy his sound. Instead he replaced the marimbas for grumpy guitars. This album features also collaborations with other artists. On this song he collaborates with Wolf Alice's Ellie Rowsell and it one of the best new rock-pop songs I listened in this short year. A teenage drama many of us can understand or made similar experiences - and a great video by the way.