It was in the late 70's when a compilation was released in Germany with the new sounds of Britain and USA. Most of my mates named it as punk but it was more than this. It was an overview of new music for us in Germany. I bought this double album by recommendation of my local record dealer. And I was infected of these new sounds and searching more of this. JC posted yesterday a memory about The Members and I grabbed out the old vinyl and played it again after decades. Respective I have to say this double album was a fantastic introduction into music that embossed me in the upcoming years. There were a lot of songs on this record that became standards throughout the years. I remember when I played this records to my mates that they were confused to this kind of music. Barely rooted in the 70's mainstream they didn't open their ears to another kind of music. So let's show some music of this compilation and I am sure many of yours will remind of these songs. 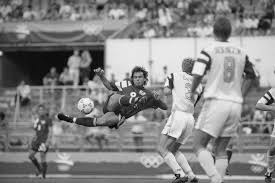 I watched the last two games on UEFA Euro 2016 last evening and was once more impressed by the Italian team. Now they are the hottest aspirant for winning the tournament. Looking forward to Saturday when Germany meets Italy. I believe in our team and think by myself we have a big chance if we attack them and play straight forward. In the last game I was surprised that Iceland has beaten England. What happened to the Three Lions? A team with extraordinary players lost again a hard fighting team. It was so disappointing to see highly paid professionals having no idea snapping Iceland's defence. Probably it's the fault of Roy Hodgson who had the wrong tactic for the game and it is time to send him in retirement. But it's not me that should judge about him and the team. Sad to miss England so let's cheer for Wales.

A few days ago I sat together with my former wife for glass of red whine together talking about this and that. During the conversation we arrived at music and I asked her if there is a club scene in Sri Lanka. She told me that in the capitol is something similar to what we know as a club scene. She lived down south in the country where the beach bars playing reggae all day long but DJ's becoming more and more these days. Not only playing song by song they are into mixing the sound to something new and special. I know these from various times I spent my days off at her place. Then  she asked me if there was any influence of India music nowadays since Brimful of Asha. I had to say no - only sometimes you'll find a piece of music with influences like that. Then we listened to a song I found. It's from a DJ named BrainDeaD and I couldn't find more informations about him. Probably he is from London but anyway a nice tune.

A Girl From The Other Side Of The Wall


In addition to my yesterday's post I ought to post a story about another formidable German voice. It's about Nina Hagen the daughter of German actress Eva-Maria Hagen and screenwriter Hans Olivia. She had an education in singing in the former GDR and a big hit with Du hast den Farbfilm vergessen (You've forgotten the colour). Because her mother was engaged with east German dissident Wolf Biermann she was classified as unreliable in the meaning of Stasi. So she settled to west Berlin in 1977 and formed a band. Their first self titled record Nina Hagen Band was one of those records in these days that a lot of people could agree with. She combined the punk attitude of The Tubes  (she covered their White Punks On Dope) with classical rock and reggae. and gave her the name of Godmother of Punk. What also was impressing was her voice over four octaves that made her sound so unique. Her second record wasn't bad at all but could not beat her first. After her affair with Hermann Brood and his death on drugs she drifted more and more into a weird world telling us about real existent aliens and stuff like that to turn into a serious reciter of the works of Berthold Brecht.

A Guy From Outer Space


Back then in the early 80's me and a couple of lads were DJ-ing at the weekend in our local pub. We all had different musical preferences but we all were maniacs in music and football. Most of us still meet every couple of month for a beer to celebrate our glory days. Wolfgang was the one who preferd the jazzy side, me and Chris were on the punk and New Wave trip and Peter, who was a huge Zappa fan surprised us with strange African sounds and music from the New York No Wave scene (he sadly died on an motorcycle accident almost ten years ago). He was the one who brought us Klaus Nomi. Listening the first time to his songs we all were uncomprehending to this sound because we were never trained in listening to operas. Nomi combined his classical opera based tenor voice with new electronic sounds. Listening more and more of his music we got more addicted to him and most of us had one song on our set-list. Sadly he was one of the first that brought AIDS and what could happen to our minds. I found a very good reminiscence to his life and work here. Knowing that it's not everybody's cup of tea I would like to introduce him to you (if you don't know him) because his combination of Sparks and opera had a great influence to band from the next generation in America.


This one is a cover by a song from Marlene Dietrich:

Here's a rare document when Nomi were a background singer on a live appearance by David Bowie at Saturday Night Live from 1979.


For several reasons I took a little break from this blog. First I watched a lot of games UEFA Euro competition and second my former wife is in Germany to visit me. So I seldom found enough time for posting. A few weeks ago my brother introduced me to a video by HipHop band from Hamburg that really went out of my radar. Beginner is a Hamburg based in the mid 90s as Absolute Beginners. Their first album with their English spoken songs sold a lot of copies. From their second record on they did their rhymes in German. I am not a huge fan of HipHop though, but some bands/songs grabbed me. This is the first song from their upcoming album. They do their rhymes about bringing back HipHop to Hamburg over a drastic keyboard sequence that. It is a good song and a great black and white video.


When the championship started last Friday me and my mates watched most of the games so far. We discussed lot about the destructive play of many teams at their first games. In my opinion it is more the fear of losing the game than to play offensive and get your chance to win. We didn't see great games so far and there were less games to remember. What impressed us much was Ireland with a great attacks toward the goal, England with a great advantage in the game but less successful at the end of the game. Italy with these old guys playing an detached game with a lot of effectiveness. Wales with a formidable game and three points. While I was typing these words France won against Albania and I think they were hot for the victory the competition. Looking forward to the second round especially Germany against Poland and Wales against England. Let's see what will come up in the next games.