Many artists tried to combine classical and modern music and nearly everyone failed. One of those who is able to overcome the gap between classic and electronic music is Hamburg born pianist and composer Nils Frahm. His music stretches from almost classical to massive percussive and electronic elements. Live he use beside a classic piano, Fender Rhodes and synths and combines them with loops and samplings. It was a great and unforgettable experience to see him live. This one is from his latest EP Encores 3 and all the EP's will be released as a complete album next month.


A few weeks ago some of Jeff Buckley's albums were released as a special edition with alternative versions and outtakes. As I was fascinated of the sadness in the songs of his father Tim I also liked what Jeff did. He always tried to make the perfect songs that never were compatible to many others in this time. They were hybrids of folk and rock and lived by the intensity Buckley played and sung them. Many of these songs were brought to us as stripped and raw versions and I have to admit that I still like to listen to them after ages. One of those re-releases that are worth to be released.


Back from my vacation in the sun, recreated and ready for the job in my new office today and filling this little part of the internet with my personal views and music. It was a great time spending the last weeks with some good friends in a sunny place even if we had to stand a few days under heavy raining. The recent days I found the time to check out some old and some new music as well and I was surprised that a band I almost have forgotten released a new album. Madder Rose released their new album To Be Beautiful after a hiatus of 20 years. Some of you might remember when they released their first album in 1993 that sounded a bit like a record that Throwing Muses always tried to make and I have to admit that it was a record that was far over the edge of these days. Now they reduced their speed for a more introspective and melancholic mood. The title track features Mary Larson's great vocals, Billy Coté's Velvet inspired guitar added with some kind of 60's ba-ba backing vocals and I can't get this song out of my head since I heard it the first time. I Don't Know How To Love You could be a highlight on many record by Lee Hazlewood or by Prefab Sprout. Big names for sure but I simply like these songs.


Here's a song from their first recording to hear the difference since then:

Time For A Few Days Off

My company finished their new administrative building in the suburb of Stuttgart these days and all of the 500 employees have to move to there in the next to weeks. It will be open-space office over three floors and many of have to say good bye to our small bureaus. I  don't know what I have to expect of this new era of working so I decided to leave for two weeks and move my body back to Sri Lanka again to avoid the stress of changing the place and come back when the removal is finished. When you read this words I will be on my way and come back at the end of the month. Until then some EBM from the early 80's. See you back in a few weeks.

Back In Time For Tea


This is the title of a compilation by a band formed in 1978 and played their very own kind of post-punk. They were more an art-school band because they tried to combine classic punk writing with art experiences and they didn't mind wrong chords and mistakes in their songs. I got aware of this new compilation by suggestion from a friend. Their songs are not the ones that got critical acclaim but for they were true and great by a band I never heard before.


In 1998 Massive Attack released one of the best albums close to the end of a decade. Mezzanine is still one those albums I come back from time to time. I can't explain the reason why but probably because the record coherent in its dark and gloomy atmosphere. Every song works well after all the decades and the songs make me still happy since I heard them the first time.

Pictures On My Wall 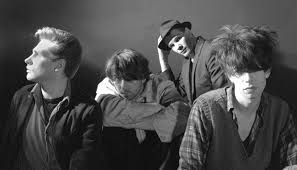 A few days ago Echo & The Bunnymen released a compilation of songs they played during various John Peel sessions. Peel was one of those who supported them from the beginning and Will Sergeant told once 'Without John Peel sessions, Echo & The Bunnymen in my opinion, would not exist! It's that simple. The band got so much support from him and his producer John Walters. Recording a Peel session was essential to the development of our songwriting skills while at the same time giving us amazing exposure and self-belief'. And you can listen to many of their songs in rare and stripped versions. It is every time a pleasure to me listening to one of the best bands in the early 80's again.


The last days I listened often to the new album by purist Acid duo Paranoid London. It is not the music I listening most but this tracks grabbed me from the first time they came to my ears. Probably it is the collaboration with other musicians playing on various tracks. Also the artists are very different from A Certain Ratio's Simon Topping to the final vocal performance by Alan Vega. Often a mixture of singing/speaking over forward-moving beats and adventurous rhythms make these tracks very special and fits completely to my ears at this time.


Another forgotten band from the late 90's are Dub Sex from Manchester. Raised in the tradition of the late punk/new wave scene they brought back the sound of post punk. A few weeks ago they released an retrospective of their works and it sound still fine and brought me back to those times when this sound was great at this time. Sadly they didn't got the got favor they should have got back lots of years ago.


Tim Gane, former co-founding member of Stereolab released since 2013 several records under the moniker Cavern of anti-matter. Together with German synth artist he released his first record called Void Beats/Invocation Trex a deeply based creature of Krautrock and a post-punk guitar. Neu! and Harmonica couldn't sound better today. I was glad to see them live a few years ago and I have to admit that I seldom listened to more inspired musicians.


I was very surprised to hear that Missy Elliott is going to release a couple of new songs after 13 years of absence. Although Throw it back hasn't the quality of many songs from Supa Dupa Fly it shows what pioneer work she did for HipHop. combining gloomy minimalist beats with unconventional breaks and samples. Fresh and old-school at the same time.