I've packed my travelling bag an I am on the way to Glasgow to meet good friends again after a long time. Surely we will a great time hanging around together, going to Simply Thrilled and watching Raith Rovers vs. Airdrieonians. I I started my trip one day earlier I had the chance to watch Malcolm Middleton performing his latest album. it was released a few weeks ago and I didn't found the time to feature it on this pages. Bananas sees Malcolm more earthier and organic than on his last records. Most of the songs tends towards longer arrangements and played with real instruments. It is a superb record and I am sure I come back to it often.


A few days ago a friend of mine sent me a link to Moon Relay on bandcamp. It is from a band from Oslo, the Norwegian capital. And I have to admit that I never heard anything from them before. Their sound is something between post-punk of the early 80's mixed with early Talking Heads funk. Not the one that you can agree from the first chords but one of those that get closer the more you listen to them. A brilliant mixture of music from the past and played with nowadays abilities. And I really don't know what they were thinking about naming their songs with special characters.


Coming back from Monday's long song to the 1-2-3-4 songs. I got the news that there is a compilation out by American punk-rock/power-pop band The Marked Men. They were from Denton, Texas about 15 years ago and they didn't made great success. I just own a single by them and I think that they should stand in a row with The Ramones. They made a very unique mixture of forward driven punk songs that could be classics if more than a few people would listen to their songs. Still great songs that would be a pleasure to be played on every party featuring this kind of sound. Hey, ho - let's go.


Two years ago Heron Oblivion released their self titled debut album. The members of this American psychedelic rock bands played in various bands before and this is what you can hear on all the songs. The songs were mostly dark and moody with massive guitar interruptions. Always moving elegantly between extremes - soft and loud, harmony and dissonance. What more does it need for a great song? 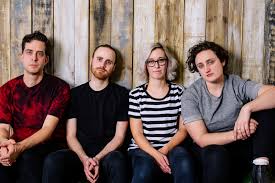 It have passed more than three years since Chorusgirl were presented on this place the last time. Since then they released their debut album a few years ago and now they are back with their new album Shimmer and Spin. When they were a noisy pop band with massive surf and twangy guitars they now developed into a band who is able to play in the first league of pop-rock bands. After changing the line-up Silvi Wersing is the main character of this German/British band and they reduced the force and speed of their former songs for more intimate and self-reflecting songs. The songs were thrifty but well tempered arranged so that Silvi's superb voice can lead the songs. Probably one of the best guitar pop albums this year that came to my ears. Well done.

A few days ago Dave Edmunds appeared on my phone with Trouble Boys and this brought me back to another great song. This is a short post because I have problems with the internet and I hope I will fix it soon.


More than 10 years ago Amy Winehouse went to Brooklyn to record her famous album Back To Black. In these days Charles Bradley worked in the small studio as a housekeeper, repairing everything that have to be done. At the age of 62 he released his first album No Time For Dreaming in 2011. In his younger days his sister took him to a gig to the Apollo Theater to see James Brown perform. From this time he was infected by the old soul music and it took almost 50 years to release his first record. I heard a few songs from him during the last years and they all were very soulful but they weren't burn in my brain. A few days back I got the news that a new record was release after he died by cancer last year. Listening to his songs on Black Velvet  I can hear what great artist he was. He brought me back to the real soul singers of the 60's and 70's. Many soul singers tried to cover rock and folk songs but I never heard better versions of songs by Nirvana and Neil Young in this style and ask myself what bright career he could have when he released this song 50 years ago.


One of the best albums this year was released by San Francisco based experimental psychedelic Wooden Shjips. A monster of an album that I listened very often at my place during the last months. I will spent more words further the next weeks but for now this have to be enough. Open your ears and get evolved to a tripped sound.


I featured Die Wilde Jagd almost a half year ago when their second album was released. It is now the project of Berlin based multi instrumentalist Sebastian Lee Philipp and you can name the music as a hybrid of repetitive percussion combined with influences of middle-age folk and world music in a jam. From easy and at the same time hypnotic percussion rhythms, in the background swelling sythies and repetitive guitar figures to existing passages of "Flederboy" sound for me like a fusion of the Berliners (e.g., to Klaus Schulz) and the inhabitant of Dusseldorf (e.g., La Dusseldorf) school for the electronic music. If you have the time for a  more than 15 minutes lasting trio into electronic spheres - I can recommend this to you