Boy Harsher is the musical project by Jae Matthews and Augustus Muller both based now in Northampton, Massachusetts. Their music is a mixture of spoken words and electronic backings. Dominated by dark, chinking beats you can hear influences of Dark Wave, Industrial and confused Techno and it makes sense. Surely not the one you can agree by the first listening but if you try it a second time you disappointed.


I made further investigations and found a song that made them famous five years ago. An overlooked gem.


When I made a backup of some files on my external hard drive a few days ago I found a copy of an album released by Motörhead in 2017. It is filled with cover versions in their typical sound. Some were released on various albums before, others were previously unreleased and I couldn't resist to play them once again. Although it isn't the music I regular listen to but it was pure fun to listen how Lemmy made this songs like they were written by himself. Actually he just wrote Motörhead when he was a part of Hawkwind.


In 1979 the were I changed my musical preferences radical I listened a lot of new music and almost every week another band appeared on the scene that was worth to listen. Music and the outfit of the bands changed rapidly and so I was more than confused to see an album in my trusted record shop that with dazzling yellow background and musicians dressed like in 60's science fiction movies. I asked myself if the music is as retro as the cover suggests and I got curious to take a listen. And I was more than confused to hear a Rickenbacker guitar as the dominant instrument in a raw mixture of New Wave, Rock, Dance and Pop. It is a classic that was nearly played to death at my place 40 years ago but still worth to listen again from time to time.


Regular visitors will know that you can find here many obscure artists and sounds. One of the obscurest sounds I found the recent days here. I have to admit that I never heard of Michigan's record label echospace before. All the more I was surprised that interpolation tapes + obscure machines is a retrospective of music made in studio and at home from almost 18 years. Radius is a long going project of Chicago area based producer Stephen Hitchell it could be described in the broadest sense as dub-techno. But it is much more than echo - it is like a reduced but pulsating variations of what electronic music can be without any restrictions. For me it is one of the best findings this year and if you have the time and take a visit and choose your very own favourite.


One of the positive things in the days of lockdown and social distancing is that I have time enough to do things you pushed along. So I started arranging my records a few days ago and I found one of my oldest purchases ever. It was a double-album by Jeff Beck and it contains his first two records. Jeff Beck is a magnificent guitar player and got his first recognition when he joined The Yardbirds and replaced Eric Clapton. In 1968 after leaving the Yardbirds he formed his own band and released his masterpiece Truth with young Rod Stewart on vocals and Ronnie Wood on bass. I am not a huge fan of blues music but in thi combination I still can get lost in. The most difference to other blues guitarist is that Jeff Beck didn't need to put his technical abilities in front of the songs. As ever is a reduced playing better to the the sound of the whole song. The way he played his guitar prepared the ground for many hard-rock bands that were formed years later. And the combination Jeffrey Rod is still superb. A real forgotten classic record and worth to be featured here.


A new post-punk band from Leeds came to my ears this week with their first single. Yard Act are one of those rare bands building their sound on harsh guitars, a drum machine and an accented bass (borrowed by Stevie Wonder's Superstition). It is the sound Arctic Monkeys tried to make in their early days, citing Hacienda-inspired tunes and vocals like something between Nick Cave and John Cooper Clarke. A rough diamond in these days. 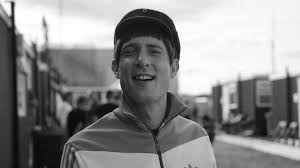 Another song that I heard for the first time a few days ago and I can't get rid of it was Where We're Going by Gerry Cinnamon a Scottish singer-songwriter and acoustic guitarist from Glasgow area. I never heard of him before and if my investigations are right he is a hidden star filling great venues without a big promotion. You can describe his music as acoustic folk and mostly the singer and his guitar. This song is different - not only that there is a band in the background - to his other songs because it has a mood like New Order playing a guitar pop tune or The Cure when they recorded In Between Days. Very nice.

Another footage from German TV show Musikladen. In 1974 Stevie Wonder played a short concert in the studios in Bremen. I suppose that I don't have to introduce him. Everything what made him great you can see in this 30 minute concert. And it was in his very young years when he was just 24 - a truthful giant.