Australia's most popular psych-pop band released a new song this week. It is still not groundbreaking but sweet, relaxed and still above the average of this genre. The song is a perfect combination of Californian beach sound and 70's disco added with their psych sound. This perfect arranged song could be the blueprint of today's pop music. Perfect for a sunny Sunday.

Taste Good With The Money


Fat White Family released a the second song from their upcoming album the resent days. The song goes back to the known sound of the band, offers propelling and playful, still restained psychic sound. The video was directed by Roisin Murphy and ends with spoken words by Baxter Dury at the end. In that clip a high class garden party moves into a splatter movie and it was intended that one must think immediately of Monty Python. Roisin Murphy explains her intention in own words:


For me there’s such a charm about them and an authenticity that’s actually incredibly rare. I knew I could not possibly work with a more magnetic bunch of performers. The idea of referencing Monty Python partly came out of the somewhat absurd and confusing political landscape that we are now living in Britain, Python seems prescient. The British laughing at themselves, a certain kind glee even in the loss of empire, singing as the ship goes down, well it just seems so... of the moment.
There is this deep ambivalence to the establishment that resonates with the Fat Whites own irreverent world view. Most of all I wanted an idea that would give them the confidence and the space to really let go and just perform, too allow them to be raw in what is essentially an unnatural situation for a bunch of ne’er do well musicians.

An Evening With Krautrock 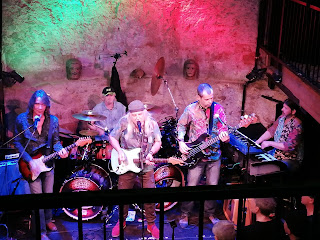 It is very rare that a band which is known about our town borders away for a concert comes to my town to play. All the more I have been glad to see Birth Control after more than 40 years once again live. I was also curious as it has created the band to substitute for the soul the voice and drums of 'Nossi' which has passed away five years ago. So I went again to to a venue that is rare in Germany. It is a cellar room 20 meters below a 500 years old town wall and is totally filled with 120 persons and many of them I know for decades. So it was fun talking to them before the concert started. The concert started at the time it was announced and from the beginning the band has pulled the audience in his spell while old classics with new songs played alternately. The sound was fantastic and also the new and young players on guitar and bass were fantastic. After all it was an evening with long songs played straight with a lot of space for improvisation. I have to admit that after all my expectations were more than fulfilled listening to songs that I have almost forgotten.


In the early days of punk many bands made a reverence to classic songs in a way of interpreting them like they were part of their own sound. Following this tradition Bristol based band Idles covered Solomon Burke's Cry to Me. Idles kept the spirit of post-punk and hardcore alive with the release of their last year record Joy as an Act of Resistance. All of their songs are full of power, moving forward with enthusiasm and verve. This cover is dominated by a monster bass according to Joe Talbot's voice. Later on drums and guitars join in to a furious final.

Idles - Cry to me


Just heard the news that Scott Walker died at the age of 76. The most of you might know him from the songs he made with the Walker Brothers,especially The Sun Ain't Gonna Shine Anymore. He was an artist that searched his whole life for the perfect song and a lot of his output doesn't fit to my taste. But I still like his first solo album with the English version of Belgian singer Jacques Brel that we had to translate in my early school days. His voice fits exactly to the songs of Brel and I still listen to them from time to time. The rest of his output is mostly too sophisticated to my taste and I often tried to get connection to it but still failed. But some songs are still worth to be listened from time to time.


Today's song is from Kungens Män new album CHEF. The Stockholm based band released a few weeks ago an album full of long songs. If you are into psychedelic/drone sound, Krautrock and improvisation from outer space you should give them a listen. For me one of the best new releases this year.


Something new from Austria for this Sunday. Sophie Lindinger tried to get rid of the chain playing electronic pop with Leyya and play some guitar influenced music. For the reason that this won't work with her band she formed a four piece female band with well known musicians from Vienna. called My Ugly Clementine. The result is just a guitar based pop-rock song influenced by Breeders or Wargirl. Not too bad for their first single.


It was a big surprise when I heard that the Meat Puppets are going to release another album after almost 25 years and asked myself should I expect them making another great record after all these years or are they just another retired band trying to make some money at the last decades of their life. I got me the record and I have to admit that they still can write great songs and still having fun playing their music. It is a sturdy album filled with pastoral country-rock and Americana. Most of the songs sneak into your ears and determine in your mind sometimes for the whole day. It is an album that works best for me when I listen to it on my way to work because of it's positive tenor that makes the start into work much easier. 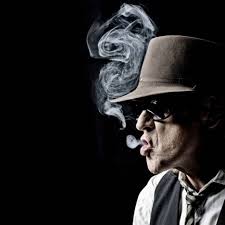 Udo Lindenberg is a German rock musician, author and painter. He begun his career as a drummer with City Preachers and jazz musician Peter Herbolzheimer in the late 1960's and concentrated in the 1970's to sing in German language. He was one of those who helped to install singing rock songs in German language and made this mass compatible. Of course he was not the one who had a rock voice and for people outside my country can't understand why he got so much success with this flimsy voice. But you ought to see it in the context of the time when a lot of people told us it is impossible to sing rock songs in German language. A few years later the punk and New Wave scene told us that it was possible at all. In 1978 he released his album Lindenberg's Rock Revue and it was a tribute to songs from the 60's and 70's everyone knew but in German language. Most of the songs were originally translated into German language and it was the first time a lot of people understood that the lyrics stood for in the originals. Surely not the greatest versions of the songs but in context to German musical history groundbreaking. Chapeau to him for trying to make a cover by Ronettes Leaader of the Pack.


Last autumn me and a couple of co-workers stood together for a few pints. After all we bet for who's winning the next game of our club. I felt good enough to bet for a win and we discussed about the insert. I said if I will win you will join me to a concert with punky new music - otherwise I will join you to a concert with Heino. He is a German schlager singer since more than 50 years and he was the main figure that we all hated when we were young. Unfortunately, I have lost the bet and had to stand to myself the concert the last Friday, After all it was horrible but we had a great time and I asked myself why 1.500 people reached for this concert watching an 80 year old singer singing new songs in his very old style. He can still sing so popular German songs - he will never get played at my home.

If we should move us already in the depressions of the German Schlagres I still mention that Peter Kraus has celebrated his 80th birthday two days ago. He was the teenager idol in the beginning of the 60s because he has interpreted rock'n'roll songs in German. At the height of his career he has produced a small scandal, while he has lighted a cigarette with 100 DM bank note to himself during a concert. Maybe one first shit-storms in the history - at least in Germany. This is the German version of Cliff Richard's Lucky Lips: