When I first saw the album in my record store I didn't know what I should think of this cover. A picture of a old floor lamp, a fridge and a hoover didn't make sense at all but made me listen to this album. Nothing more or less I was infected by the first album of The Cure from 1979 and I have to admit that I still love them. They made the sound of punk and new wave compatible for many others. Without them my musical education wouldn't be the same as it was. Three Imaginary Boys is a milestone in music history that still works after more than 30 years. Timeless songs for timeless listeners. And to have the courage to cover Jimi Hendrix in these days is more than respectable.


Rockpalast was the first TV-show presenting live music by popular bands. First only on radio and later in their highest times live on Saturday evening all over Europe. One of the first bands played live for them was Can in November 1970. This concert was released a few months ago and it shows how great the band could be on stage.

New Wave From Across The Ocean


My musical taste in the early 80's was stamped by many bands of the new wave/post punk ear. Nearly almost new bands came from Great Britain and I asked myself why I know less bands from across the Atlantic ocean. Maybe because the papers didn't noticed them, the record shops didn't had them or just because I ignored them. One of these bands are Romeo Void formed in San Francisco at the end of the 70's. They only released three albums and disbanded in 1983. Their music is somewhere between Joy Division and Gang of Four and dominated by Debora Iyall's vocals and Benjamin Bossi's saxophone. The could be famous when they record company would have promoted them more in Europe. 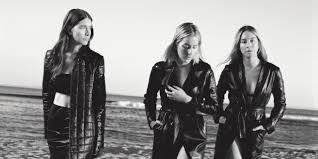 Three sisters from San Fernando Valley, just behind Hollywood Hills, released and album that could be the soundtrack for this summer for me. Danielle, Estelle and Alana Haim celebrate on Women In Music Part III their own interpretation of today's Californian pop. It is an impressive record showing what they learned in almost 20 years in music. Mostly introverted songs somewhere between dark electro-pop and soft rock. They quote Lou Reed in Summer Girls featuring saxophone and doo-doo-doo or just let their voices speak in good songs.


A few weeks ago I pleased myself and bought a new turntable because the old one broke down months ago. Now I am able again to listen to my old albums once again in perfect quality. One of those old records recalls the time when I listened to jazzy tunes. I have two live albums by Chuck Mangione an American flugelhorn player, trumpeter and composer and almost forgot how great they were. Most songs were arranged superb and it made me smile to listen to them after decades. Land of Make Believe is from the album with the same name from 1973. A song worth to be featured on our Monday's series and bass-lines that were resumed years later when disco movement started.


A day ago I was in the mood to listen to Rio Reiser once again. He was the the head of Germany's first pre-punk band when no one knew punk at all. Ton Steine Scherben raised in Berlin in the left wing squatter scene with anthems like destroy all that destroys you. Simple German rock from the 70's but something to say to young people like me in these days. They played many free concerts and the other merits of their live appearances were stolen by the managers (especially named here is Claudia Roth, now a member of the Bundestag for the Greens). Rio Reiser released his first solo album in the course of the fucking New German Wave movement and got rid of his dept. In these days he maybe wrote the best love songs of this decade. For me he was an exceptionally gifted artist. One who was on the right side and one who could express his emotions in words and music. He died too early for me back in 1996 but I still come back to his songs when the mood is right and I always can get lost in them.


One of the best albums released in 2017 was Nadine Shah's Holiday Destination, a superb produced complex and insistent record I used to listen often during the last years. Now she announced her new album for the end of June. And still she convinces me with her velvety voice over a guitar funk sound Gang Of Four could have written. Looking forward to the release.


50 years ago Rod Stewart released his second solo album Gasoline Alley and impressed me very much. It was one of the first albums I purchased by my own money and at these times I had a huge affection to British blues singers. I listened to Rod Stewart and Joe Cocker many hours and that stamped me. I loved the broken voices that made me feel that their songs come from their hearts. Years later I learned that it wasn't reality but their songs are still in my heart and a part of my musical education. Gasoline Alley is one of the best singer-songwriter albums of this decade, filled with great songs by other artists and Rod made each like that they were one of his. The cover showing a homeless person on a empty street fits very well to the songs on this album. Confirming to songs about people standing outside the regular ones. It is an album that accompanied me during the last decades and I will always return to this-


Back in 1995 Underworld released Born Slippy as a single not knowing what will happen to this song. Released as just another song in the rave ear this song was known as the trademark of rave after it was on the soundtrack of Trainspotting the great movie based on Irvine Welsh's novel about the drug scene in Edinburgh. In Born Slippy the highs and low-pressure areas of a whole era banged on each other. The absent-mindedness of the dance and drunkenness, famous „being fallen in love in nothing“ and the depression afterwards which got again in the reality melted within 04:24 minutes (single version) to the symbol of the hedonistic 1990's years. This song functioned in the bedroom, in the pub, in the club and in the stadium. Not only this song lead me to a new kind of music and I am glad about this.


I saw a documentation about where black music is coming from. polyrhthms were brought from the first slaves displaced from Africa to North America. Songs based on these rhythms were sung to make their work livable. These first working songs and chants had a massive influence in every kind of blues genre and gospel. Many jazz musicians a hundred years ago adapted some of this songs and named them as a heavy influence to their music. Rock and Roll brought the black music to the white people and established this music with all it's facets in contemporary music. It spreads from the early Son House with his powerful slide guitar to African drums based Detroit House like Drexciya.