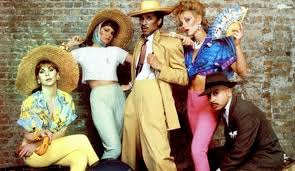 Nothing new at my place during pandemic days. We have a still a lockdown that was extended by the government until Christmas keeping public life on a low level. My former wife is still here and she has no opportunity to go back to Sri Lanka because the airport is closed. So we stay at home and following the rules of less contact to other people except family. I had a week of last week because I had to consume my holidays that I usually spent at her place in December. So I found the time to compile an ICA for our mate Jim. The ICA was rapidly finished because too many songs came to my mind that should be on it. Here is one of those that didn't made it on the final list. August Darnell and Andy Hernandez made the sound of 1982. It was a kind of weird listening to his mix of Disco, Latin and Carribean music when all around fantastic new bands were on the scene. Their legacy was guiding my ears to the new and excellent Indie- and Nu- Disco scene in NYC.

Kid Creole and the Coconuts - Annie, I'm Not Your Daddy