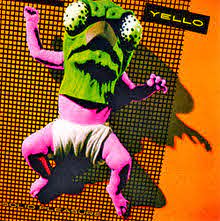 It is not comprehensible why Yello didn't appeared since I was running this blog. Surely not because they make bad music or I don't like them. I remember the first time I hold their first album in my hands looking at the cover this must be another punk band. A baby in a nappy and it's head looking like the head of a frog doesn't fit to a Swiss band in these days. The project by Boris Blank and Carlos Péron and added by congentital voice by Dieter Meier was radical in 1981. In times before sampling was used by many artists Yello created their on sound on using fragments of songs, tape-recordings, keyboards and percussion. Solid Pleasure was one of those records that made my start into new electronic music. It is almost 40 years ago when I bought this record and it is still a pleasure to listen to it. Bostich, a song that became famous on  dancefloor appeared the first time in a raw version on this album. The rest of their songs and success is history but they never had the verve of their first album.
Yello - Bimbo
Yello - Night Flanger
Yello - Bostich
Yello - Eternal Legs
Eingestellt von Walter um 06:00