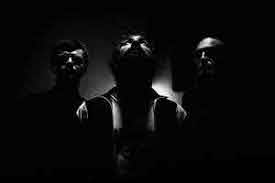 One of the best findings last year was Kompromat by 10.000 Russos, a band from a coastal town in the north-east of Portugal. I got aware of them when they released their third album on Fuzz Club records. I have to admit that I never supposed that music like this was made Portugal. But it is better than many other bands all over the world. These guys are the ones that give psychedelic music a new inspiration (except some bands from Sweden that was featured at this place). The band have a combatative repeato rock sound with nods to Suicide and Neu! with lots of abrasive guitars and motorik percussion. And Joao Pimenta barks out rants like a futurist Mark E. Smith or Captain Beefheart. Hypnotic drones, pulsing beats and shaman-like mantras stamp their sound - perfect for a party in a basement garage in post-apocalyptic days.

Fuzz Club is always worth keeping an eye on. After blasting Kompromat out at ear shattering volume this morning, any new neighbours I haven't yet already met are probably now quite aware of my existence! Cheers Walter!