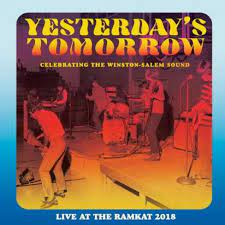 I didn't knew that there was a musical scene in Winston-Salem, North Carolina especially in the 70's. A few days ago a live recording came to my ears where former original member of bands from Winston-Salem came together again to perform the songs of their younger days. They reanimated the garage sound and the enthusiasm from their fuzzbox years and I have to admit that it was fun listening to these song that relegated me into times before punk when it was easy to take your instruments and play your own garage rock. This project was initialized by Chris Stamey and Peter Holsapple both members of Winston-Salem's most popular band The db's.

The Royal Opposition - Galaxies Of Love

Hi Walter, thanks for the nice review of Yesterday's Tomorrow. Just one point: I was merely a participant, but Chris Stamey was the one who organized the concert in conjunction with the publication of his autobiography, A Spy in the House of Loud (University of Texas Press). Best, Peter Holsapple (The dB's)