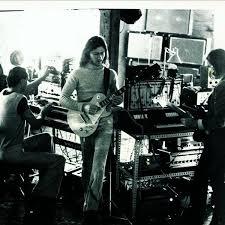 One of the first so called supergroups of the krautrock era was formed in 1973 as a collaboration of Cluster's Hand-Joachim Roedelius and Dieter Moebius and Michael Rother, guitarist by Neu!. When their first album was reduced to repetitive sound producer Conny Plank gave them a more brighter sound with dominating synths. Their second album De Luxe is a classic and played often when I don't really know what to listen to.