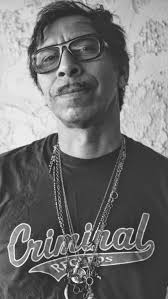 In February Kid Congo Powers released Swing from the Sean DeLear an unexpected EP with The Pink Monkey Birds after a few years of absence. Delear was was the singer of LA punk band Glue who died four years ago. Kid Congo is now living in Austin, Texas and some could think he lost his power in the Texas heat were wrong. The first three songs show that he is still able to play a powerful garage sound with the Birds. On the second side of this EP he turns into another way. For 14 minutes he turns into an another direction. The music has a laid-back Chicano flavor reminding me a bit of Santana with flutes and bongos coming step by step to the forefront. As far as I know, the song came into being after Powers had a dream about late friend and bandmate Jeffrey Lee Pierce, who passed away in 1996. Power's voice is reminiscent of Vincent Price's, giving the song and eerie vibe especially when he sings 'Although you've been dead for quite some time, you walked into my room, you walked into my mind'. This could be featured in our Monday's series but it could be also a good start into the weekend.