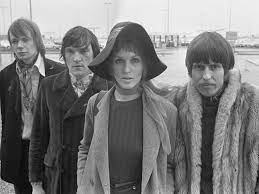 The recent days I found another gem of live music filmed for German TV-station. Back in 1968 the Berlin Jazz Days was a forum for jazz purists featuring arty musicians like Pharoah Sander and Gary Burton. To show their open mind they there also Muddy Waters played a gig with Otis Spann and Brian Auger together with Julie Driscoll and Trinity. This was one of the first gigs they played after they left Steampacket, a blues band they might be know as the first band Rod Stewart the lead vocals. Trinity had many jazzy influences and worked maybe as one of the first ones on an organ sound and tried to implement his musical collaborations from Jimi Hendrix to John McLaughlin. They had big success with a cover version of  Dylan/Danko's This Wheel On Fire. This footage shows another cover version and their interpretation of Donovan's Season Of The Witch is maybe the most ad-lip one beside Vanilla Fudge's scary version.