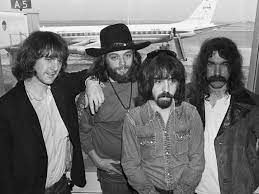 From time to time I come back to a series of live performances in German television I started a couple of years ago. The recent days I found a clip from an appearance by The Byrds in 1971. It is an almost 14 minutes long version of Eight Miles High but frankly speaking it has nothing more in common with the original than a few chords but shows a side of the band that is seldom heard. This version is like The Byrds jamming with Little Feat and or Grateful Dead. What makes this song great is to listen to the superb bass played by Skip Battin and the guitar picking by Clarence White. It is a kind of stuff they don't do in this days anymore.

Uschi Nerke, the little lady appearing at the start of the songs tells the story behind the song: five years before, 8 Miles High had been banned from US radio. The song they're performing is a new version from the album Untitled.

What a fantastic clip.
Thanks Walter