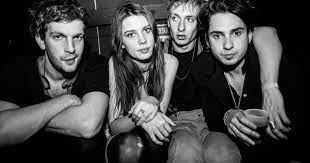 A band I featured from time to time is Wolf Alice formed in North London almost a decade ago. I really like their powerful forward forcing sound and Ellie Roswells multifaceted vocals. Wolf Alice is going to release a new album and the first foretaste was The Last Man On Earth, a penetrative ballad ending with massive guitars made me looking forward to their new album. Now a second song from this album was released and shows them in the way we loved this band for: great riffs, a tough rhythm group and Roswell's voice between shouting and whispering. A song that is made for a live gig that will work more than well in a small club where people soaked with sweat are dancing around you. Hope I can see this once again not too far away.