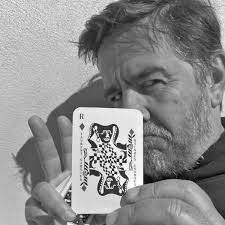 On the last day of April Laurent Garnier, the French electronic music producer and DJ announced the release of an album in September. For this only it is not remarkable but it will be a collaboration with France's best neo-psychedelia rockers The Limiñanas. I never expected that Garnier who began his career in Manchester in the late 80's in the orbit of the Hacienda to explore later house music and working together with Frankie Knuckles in NYC. The result is neither a Limiñanas techno record nor a Laurent Garnier rock album. It is more like a road trip through American desert with Lionel's typical guitar as a soundtrack to a 60's film noir. For me it sounds like Garnier's contribution goes beyond the mere production of beats and samples - he might inspired them on their way moving westwards. Looking forward if the rest of this album will be as fascinating as this song.

This is excellent, heard it at the weekend but forgot about it. Really good sound.