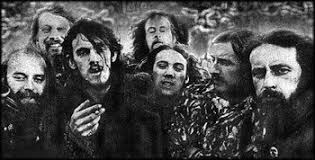 Last week Swiss Adam made a great post about Robert Calvert and Hawkwind that made me pick up an old record by Hawkwind that I almost forgot over the years. In Search Of Space was their second album and for me the essence of the band and an album that combined krautrock elements with spaced out hard rock. Probably the originals could handle their instruments better but the members of Hawkwind didn't give a damn about this maybe because they didn't have any ambition to be rock stars and rather using drugs and booze. Lester Bangs once described this album as monotone jammings with hypnotic rhythms and solo unravelling off into space. The synthesizers warble, woof and scream and gurgle like barfing computers, the drums pound, and the singers chant unknown tongue rebobs. There is nothing more to add.

Hawkwind - You Shouldn't Do That

I've dug out several Hawkwind tunes since reading Adam's post, but there are few better than this one.