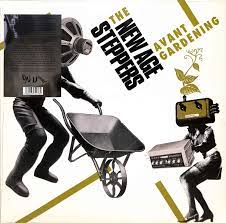 In the late 70's a lot of punk bands turned into reggae and experimented with dub and and other effects. One of the most influenced producer of this kind of music was Adrian Sherwood. He released on his On-U Sound-label the most significant records in this genre. The main were the New Age Steppers, a dub collective of former members of The Slits, PIL, The Pop Group and The Raincoats. They only released a few records but their influence was immense. I was surprised when I heard about the release of a new album by New Age Steppers until I found out that was only a compilation of lost tracks or versions that was only released as added versions of their albums for the Japanese market. And it is a gift that this songs and versions was released now on this fantastic compilation Avant Gardening. And it is great to listen to a long lost Peel-session when the missed Ari Up is on vocals.