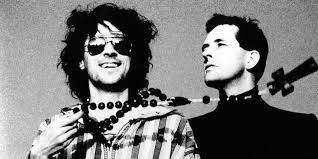 In the late 80's a new kind of music came over from England. A sound that was really new and exciting. Bill Drummond and Jimmy Cauty both companions of the British independent scene surprised us with a mix of rap-influenced heavy sound and using various samples in their songs. Both used different names for their bands like Justified Ancients of Mu Mu or The Timelords but they got their place in history as The KLF. Without The KLF German techno band Scooter wouldn't exist and it is a pleasure listening to songs filled with great ideas after a longer time.

The KLF - Last Train To Trancentral (Live from lost continent)

The KLF - America What Time Is Love