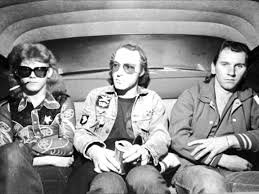 It is almost 40 years ago I bought a record with classical Rock 'n' Roll that I found after a long time in my vinyl collection. I was very in to it these days because the rhythm section was so awesome. Seldom heard a bass player and the drummer beating out the rhythm with such a verve and enthusiasm. I asked myself while I put the record on the record player if this kind of music works as well as it did a long time ago. And I was surprised. Most of the songs did - not only as a sentimental touch to the past. The band is called Hurrigane (yes, it was a clerical error by printing their first record) and they were from Finland. They was very big there and they called them Finland's answer to pub rock performers like Dave Edmunds or Dr. Feelgood. Some may say it's just covering old songs but didn't a lot of others the same?

Have a good weekend all of you.

Walter, that first song is certainly like Dave Edmunds, great stuff. Really enjoyed all three. And NO BANDWIDTH!!
George

I am glad you like this stuff. If there's no bandwith, than I don't know the reason for no possibility to download. So let me prepare a few songs by the Hip - I'll send you a link these weekend, George.
Cheers
Walter