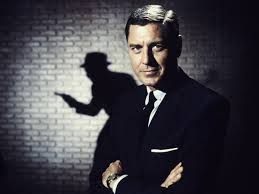 In the late 1950s Henry Mancini wrote a song that became famous by Duane Eddy. Not written as a classic twangy song it was covered by many artists during the upcoming years. It was hard to decide which version should be featured today. The version that I offer is by The Remo Four, a band from Liverpool that's known as members of the so called Mersey Beat. What seldom known is that they released some fine instrumentals. Their version of Peter Gunn has the classic opening with a Duane Eddy-style guitar to turn more and more into a psychedelic version.

Many years later The B52's released their fantastic Planet Claire. It has a lot of references to Peter Gunn especially Ricky Wilson playing his Rickenbacker guitar.

Never heard of this lot, Walter, but that's a great sort of psychedelic twanggy version of Peter Gunn.
George

Hi Walter,
Sorry, but I had to send you a new invitation. I couldn't get the comments feature turned on, so had to recreate everything all over again. You'll have to now sign in using the Second invite.