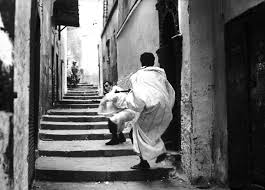 Algiers released their first record these days. A friend recommended it to me and so I searched in the net for it. What I found was a very new and exciting collection of songs. Listening to their songs I thought by myself what a crazy combination of words and music. Franklin James Fisher formed Algiers with some white friends he knew from his childhood in the suburbs of Atlanta. After working in a French investment bank he quit his job to take some time out. In his music he combines the ambient doom of those post-crash days in banking and more recent unrest in Ferguson and Baltimore with a full-throated critique of the system responsible. Algiers puts its politics, Marxism and anti-kapitalism over industrial drum machine and Southern hymns and chants, finding common cause in the shouts and claps of punk and gospel. Sometimes it sounds like The Redskins make today's music. And that's not too bad at all.