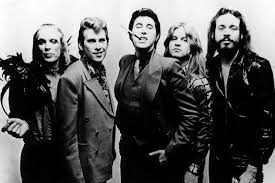 Back in 1973 Roxy Music appeared on German TV for a small live appearance. It was the time when they released their second album. Looking back to this show I was astonished about their appearance. I was very young and their sound was new and different and I didn't know how to handle this kind of music. I was astonished how rock musicians could wear dresses like them. In normal ways musicians shown up with long hairs and worn out jeans. But now Bryan Ferry appeared with a white suite and it was extraordinary in these times. Not only the songs were great at this time - Brian Eno made s sound that would be the basis for the upcoming electronic sounds.

For me this live concert was the initial for the upcoming music.
Enjoy this little gem.