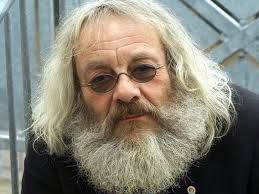 Sadly the news arrived that Harry Rowohlt died last night after a long and painful illness. Looking like the young brother of Karl Marx he was a German writer and tranlater. He also played the role of a derelict in famous German weakly-soap Lindenstrasse. Rowohlt is known for his insightful and humorous translation of Milne's Winnie-the-Pooh. He also published German translations of works by Leonard Cohen, Robert Crumb, Ernest Hemmingway, Gilbert Sheldon, Shel Silverstein, James Joyce, Kurt Vonnegut and Ken Bruen. He was the one who gave me an understanding for the works of Flann O'Brien. I remember ten years ago we went to a reading by him. Only he on the stage sitting at a table, a glass of single malt on the left and a cigarette on his right side (in 1996 he was designated to the ambassador of Irish Whiskey). Telling stories in his own and very unique way. It was fantastic to listen to him for more than two hours.


No post without music. A song written by Shel Silverstein and sung by Marianne Faithful that's always worth to be played.

He sounds like a sound bloke Walter .Always good to hear Lucy Jordan

Yes CC. He was a bloke to the one who could agree to him. Never listened to anyone like him. He was like a force of nature with his deep dark voice and an entertainer if you could understand his German and his slang. Anyway, thanks to listen to him, even you don't understand his words.