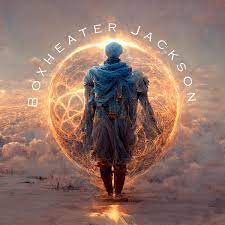 Another new artist came to my ears when I checked my inbox. As usual I deleted most of the promotion mails that arrived during the last weeks. Only a few got a chance and I followed the link to their newest releases. For this reason I found We Are One the new album by Boxheater Jackson and I didn't repent it. Just the name made me curious what kind of music is behind this name. Boxheater Jackson is the project by Cornwall based DJ Big Vern Burns. He learned a lot of Andrew Weatherall and his collaboration with Genesis P. Orridge was also a big influence for this album that is filled with cosmic acid house. So many ideas, great beats and songs that it is hard to pick out only one. We Are One is filled with classics and a joy of rhythmic pleasures (as Brother Joseph said).