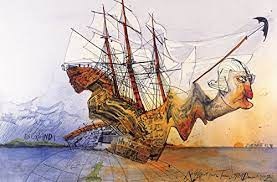 During the last days I read Fear And Loathing In Las Vegas by Hunter S. Thompson once again just to see if this books works to like it did almost 50 years ago. I have to admit that I wasn't impressed that much as in my younger days but the way Thompson wrote is still freaked out. He described the journey of two persons writing about an off-course race in the desert near to Las Vegas. But it is more about using drugs than reporting about the race. Anyway a book worth to be read. While I read this book I remembered Curse Of Lono a band named after another novel by Thompson. Based in London they released a couple of albums and EP's and I don't know if they still active. They wrote songs Mumford And Songs would die for. Always between classic rock with a heavy affinity to Americana and Country. Steppin Out is a song that works to any time and any place to me. Especially Sunday morning with my first cup of coffee.

Curse Of Lono - Steppin Out