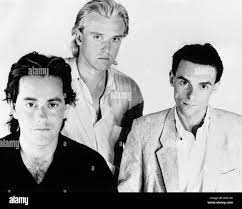 Back in 1981 Martyn Ware and Ian Craig Marsh, former members of Human League formed in Sheffield together with Glenn Gregory on vocals Heaven 17, one of the pioneers of new electronic synth pop. They came up with the first wave of new wave bands and brought back funk into music. It was new and irritating to the guitar based music that was released at this time but you couldn't detract from the groove and funky sound of (We Don't Need) This Fascist Groove Thang that was played in every good discotheque in the 80's. It was also a political statement because the single's condemnation of the political leaders Margaret Thatcher and Ronald Reagan proved an ill-fated move. And also these meaning made it an hit here in Germany.

The song was originally wrote for the B.E.R.-project and was also released on their debut album Penthouse and Pavement which became a classic in electronic music. How great the song on this album are is shown by a remix of Play To Win by New York DJ's Martinez Brothers who had a big success in Ibiza.

On their second album they created on of the best songs from 1982. Let Me Go is still one of those songs I return from time to time and I think it is a perfect track. Sometimes it is simple to create a great song when you have a bubbly bassline, dubby drums and the chopping up of the lyrics.

With you all the way, Walter.

Fascist Groove Thang has seemed more essential than ever these past few years here in the UK. I've been giving it a few more spins that usual when pulling out some old 12" records to listen to.

Play To Win, is by far, the best thing that Heaven 17 ever did - a superbly produced and moody piece of synth-pop, with a lyric that reads as if it belongs to a tear-jerking ballad.

I was really into Heaven 17 as I reached my teens: The Luxury Gap was the first that I bought for myself but I was already familiar with Penthouse & Pavement and went on to buy How Men Are. Even then, I used to find some of the lyrics teeth-clenching at times, but these three songs are amongst my favourite Heaven 17 songs. I'm not convinced about The Martinez Brothers Edit of Play To Win, but then the original 12" version set the bar very high.