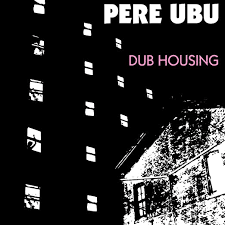 A few days ago while I looked for something other I found Dub Housing by Pere Ubu. I almost forgot that I had a CD version from their 1978 album. Formed in Cleveland in the late 70's they created their very own version of rock music. Inspired by punk as a new form of music they added elements of krautrock and free jazz to their cosmos. Seldom heard a darker and dangerous sound like on their first albums. If any music can hurt than theirs. I know this is not the cup of tea for everyone and lots of people would annoy this kind of music but if you are willing to to go to the darkest chapter in punk/new wave influenced music you have to listen to this. A tour de force of experimental sound. On the other side many bands were influenced by them. Once I read that they were the link between Velvet Underground, Captain Beefheart, Soft Machine, Brian Eno and This Heat and I have to say this is true.

Great album though not an easy listen as you say. 'Caligari's Mirror' is a personal favourite