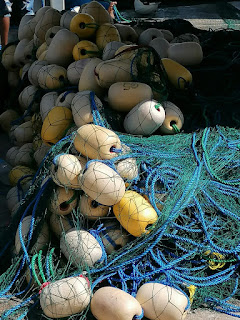 Part three of this little series about early 80's indie-pop. I have to admit that before I discovered this compilation I didn't listen to artists/songs from this era for a very long time. It might be sentimental to come back to this kind of music but it was a kind of music that accompanied me through various summers long time ago. When I listen to this songs again I was surprised about the abilities of the bands about songwriting. Of course the instrumentation is often the same: some guitar chords, a soft and emotional voice over a well arranged sound. But these songs, often one of the first recordings of the bands, were high class and I ask myself how they could sound like if some new bands will cover them. Certainly they can't destroy them.

From Glasgow Del Amitiri, a Glaswegian rock band appeared at the beginning of the 80's on the scene and had big success with their debut album. Their songs had a free and unfolded sound over a basic of jangly guitars. Best shown on the flip-side of their 12-inch Sticks and Stone Girl.

Del Amitiri - The Difference Is

Kitchenware records was one of the homes of pure indie-pop in the beginning of the early 80's. One of the first bands they signed were The Daintees which became later big recommendations when they appeared as Martin Stephenson and The Daintees. Their first album Boat To Bolivia was an album that I played often at these days because they had a very unique mixture of various influences of rockabilly, slow tunes and straight rock.

The Daintees - Involved With Love

The Gift were a British indie band and you can find less in the internet about them. They didn't had great success or a hit single but they also had the jangle guitar sound like many others in this era. Listening to them again it sounds like The Smiths were playing some early demos or The Cure replaced Robert Smith with Morrissey.

The Gift - Crashing Down