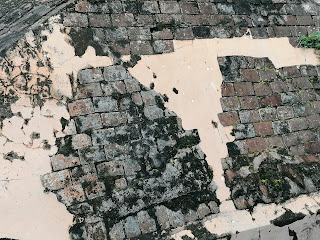 Cherry Red is one of those record labels (Germany's Bear Family is another)digging deep in musical history to create a collection of relevant genres. At the end of last year they released The Sun Shines Here a three CD-compilation of songs released between 1980 and 1984 showing the whole spectrum early indie-pop had at these days. It was a period when London was centred around more angular, aggressive music and bands from Scotland, Manchester and Liverpool emerged drawing on the cooler end of 60's/70's music to create something fresh and new. Listening to those songs again made me thinking this could be a theme for a new series.

Liverpool's Pete Wylie released his first single in the late 70's as Wha! Heat and it is a classic because it has everything his later releases were famous for. A straight beat, great guitars and his incomparable voice.

Also from Liverpool It's Immaterial appeared on the scene in the early 80's. Formed by former members of the pub-rock band The Yachts they appeared with fantastic pop songs arranged with additional horns. A good example how great they were was their first single.

A shortly existing band were Girls At Our Best from Leeds and their sound based on short guitar riffs, forward driving rhythms and a clear voice. Perfect girl's pop from almost 40 years ago.

I loved Girls at Our Best. A great run of singles and a great album. Perfect pop.

Fantastic stuff Walter. Cherry Red have re-released a lot of great things in recent years, as well as being the current home of the magnificent and magical Luke Haines.