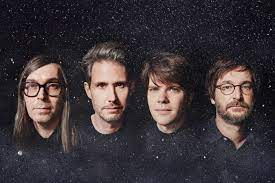 To name a nee album Never No More War is in times in which in Eastern Europe warlike clashes threaten foreseeing or even just a platitude depending on the point of view. Not, however for Tocotronic a band from Hamburg which is active since almost 30 years and they have been always a political band. I always liked their music that was torn between guitar based indie-rock and lyrical ballads. And with their new album they returned to their roots again. On Nachtflug old school guitars wafting through the song, a good bassline prepares the ground for Dirk von Lowtzow cryptic lyrics. Good to have them back