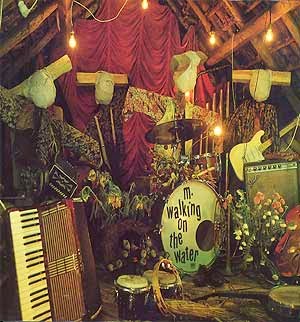 This series run since almost one year and it was a great fun to show you some German artists that made a very good music during the last 40 years. I tried to show you the kind of music German musicians were able to do. But like every series it has to come to an end. The last band I would like to introduce is M. Walking On The Water. It's a band that was formed in Krefeld, a bigger town close to Düsseldorf in the middle of Germany. They were an Indie-band I liked very much when they released their records. A very own sound according to bands like The Woodentops and other bands in this genre. In 1993 they released an EP called 'Pictures of an Exhibitionist' covering old hits by King Crimson, Genesis, Jethro Tull, Caravan, Yes and Deep Purple. Not the ordinary songs to cover and in their interpretation something special.

This will be almost the end of this little series. Next week I'll make a mash-up of German songs that mean a lot to me. It might be distressed but that is even my musical background the time I got older.