Inflammable Material - First Records That Impressed Me Much # 7 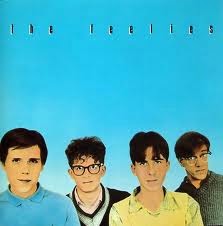 In 1980 Stiff Records released the first album by The Feelies 'Crazy Rhythms'. And it was a totally different sound to the other artists on this label. I first saw the record in my local record store and asked myself what is this? Four teenager playing another collage-rock? Because Stiff Records in normal manner doesn't publish any shitty music I asked the trader to give me a listen to this. From the first song on this album 'The Boy With The Perpetual Nervousness' I was caught by this band. The songs starts in near-silence, with just a click of wood percussion  until a guitar appears and the drums begin to play. From then on the band delivered eight more classics including a superb version of the Beatles' 'Everybody's got something to hide' much more faster than the original. The Feelies created their very own style. While everybody was focused on the two guitarists Mercer and Million I think the mastermind was Anton Fier. He plays the drums like I heard seldom before. He's able to play straight-up beats but aiming at a rumbling, strange punch that updates the Krautrock trance into giddier realms. It's still a timeless album that stood the test of time. And as Brian said a few days ago: watch out for their appearance in Jonathan Demme's 'Something Wild'.

Dirk rightly misses the best song on this album - here it is:

Fully agree, Walter, although I cannot understand why you left out 'Fa Cé-La' in your links! To me this is this album's standout tune ...

You're right Dirk, without Fa Cé-La' in it's not complete. Look at the update.

Walter, a man who listens to his audience!

And yessss: another satisfied customer!!

Great album, Walter. You nailed it.