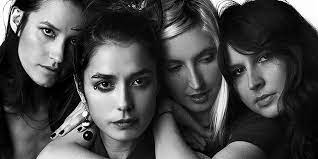 Warpaint is one of these bands I came back often to during the last years not only because they made timeless and great music for me. So I looked forward to their new album that was released last week. To be honest I didn't have more expectations than another good record by them and I have to say they disappointed me. All the songs were made during the lockdown and any musician recorded their parts in isolation and the songs were built together later, slowly and layer by layer. And this worked very well because they had the time to create their sound perfectly. The songs seems to have a bit of westcoast feeling and sometimes they remind me a bit of Fleetwood Mac at their best times and by comparison, feels more complete… more accomplished even. Anyway, they are far away from them and they didn't lost their roots. They made songs that grow the more you listen to them. It is an album that will stand the test of time.

Enjoying it a lot, definitely a grower