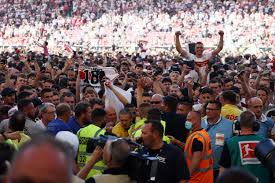 During the last week there was a lot of work to do in the office and I didn't found time and inspiration to keep the blog going. And it seems that this week will not be much different. On Saturday all of thoughts cruised around the last game of Stuttgart. They needed to win against Cologne and simultaneous Berlin has to lose in Dortmund. Sadly I got no tickets so we had to watch the game in a local pub. The pub was filled over one hour before the tingler and Stuttgart made probably their best game in the first half this season but missed like always to make more than one goal. So it happened like many times this season that Cologne made the balance by a huge mistake of our goal keeper. The same time Dortmund made the 2:1 against Berlin and we come to terms with the relegation this week until our mid-field player Endo made our 2:1 with a header in the extra time. This results were enough and we will play in Bundesliga next season again. All over the town we saw so many happy people that we missed the third relegation in six years. Today's song is from a new compilation called Sound From The Iranian Ultraverse I got aware last week. Artists from the Iranian diaspora located sometimes in the Bay area and New York became a platform for slamming electro, techno and propulsive breakbeats with parts of dizzying synths and warehouse raves. This song by Voiski is a good example of what is possible for these artists. Foreboding minimal techno with a massive futuristic touch.

I'm known to be partial to a bit of minimal techno now and again. This one hit the spot nicely.

I was delighted when those scores came through.....and with a bot of luck, I will get over to see Stuttgart next season, hopefully in the autumn.