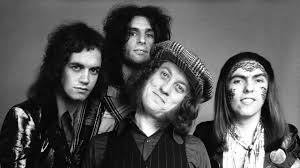 A few days ago I was in the mood to listen to glam rock again after a longer time. When I take a journey back into this era I always visit one of the best bands of this genre. Wolverhampton's Slade were the prototype of a working class based rock band and became leading bands of glam. Their sound is just a blues-rock influenced rock but Noddy Holder's voice made all their songs different and unique. In the early 70's the appeared several times on German television in shows by Beat Club and Musikladen and I can remember that they impressed me much watching them in my very early days.