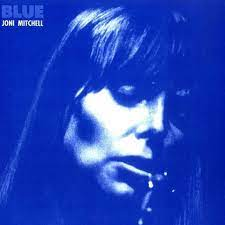 I can't tell the reason why I came back to an album that was released 50 years ago. Joni Mitchell released Blue in a period when she was finished her partnership with James Taylor not only because he was addicted in heroin. Blue is one of those albums by an artist that strips her soul to us. Fragile songs by Joni after she got big success after Woodstock a song that stamped almost a whole generation. All the songs were reduced to her soft and broken voice that fits completely to the lyrics of songs that showed a lot to the feelings she had in these days. I seldom listened to another album that showed an introspective to a soul she did. One of those singer/songwriter albums that are timeless. Often sad but sometimes you can see beauty and optimism like in Carey.

Joni Mitchell - All I Want

I think this is an album you appreciate more with age. I remember an older colleague playing it to me when I was in my 20s and I didn't see what the fuss was about. I can see it now.