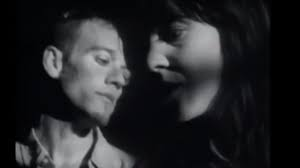 Since a few week TheRobster is running a superb series of imaginary 7''s after a long running series about the singular adventures of R.E.M by JC & TheRobster. It was a highlight of the weekends during a couple of months and brought me back listening to their albums once again. When I listened to their songs again I remembered a song by Kritstin Hersh from 1994. Your Ghost was her first single and it was remarkable because it was the only collaboration with Michael Stipe on backing vocals. It is song that reached British charts until number 45 and one of those songs touched my soul in a way I couldn't explain. Only because it is beautiful.

It is indeed a beautiful song Walter and one I haven’t heard in ages.
Thanks

Danke, Walter. Never seen this video, but the song is a long-standing favourite. Like her band, a stupendously perfect debut album.

A fantastic single. The album was pretty good too as I recall - I must dig it out again.