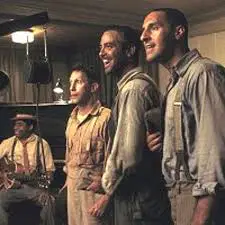 One of the oldest American folk songs is Man Of Constant Sorrow first recorded by a blind fiddler from Kentucky. Since then many artists made versions of this song. The probably best known version was by Bob Dylan released on his first album almost 60 years ago. This song appeared on my mobile phone a few days ago on my way to the office in a version by Rod Stewart. He also made a version on his first album and I almost forgot how great his version was when he was a kind of lad next door.

In 2000 the song appeared on the soundtrack of the Coen brothers movie Oh Brother, Where Art Thoug their homage to Homer's Greek poem The Odyssey. It is also one of my favorite movies of all time because it is one of the few movies that transports a classic poem into the time of great depression with a superb atmosphere showing the South of the United States.

From when Rod was good
Thanks Walter

As CC says, from when Rod was good! Oh Brother Where Art Though is one of my favourite films too - love that version.