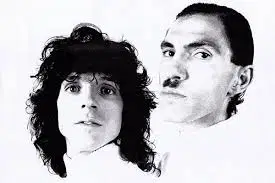 It was in the early 70's when two brothers from Los Angeles appeared on the scene. Ron and Russel Mael came to play their very own kind of glam rock and I have to admit that I didn't heard something like this before or after. Inspired by British bands like The Kinks, The Move and early Pink Floyd when Syd Barrett was their mastermind they made their masterpiece with their art-pop sound album Kimono My House from 1975. With their songs they were pre-punk, new wave and early synth-pop and had a massive influence to many bands and singers of the new wave era. This footage is an almost 15 minutes live appearance in the monthly show Musikladen. Love to see them after a long time and remembering a great and almost forgotten band.

We love Sparks in our house, but I wouldn't say they have been almost forgotten. Quite the opposite in fact, they are enjoying something of a rennaissance of late with some very highly acclaimed albums and a documentary about to be released (called 'The Sparks Brothers').