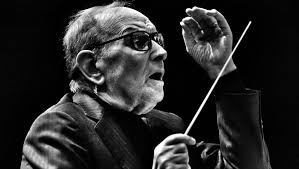 Today the sad news arrived that maybe the greatest composer of movie soundtracks died at the age of 91. His music was the soundtrack to many movies I watched from my younger days more than once. Sergio Leone's movies wouldn't be the same without his compositions. I once read that Morricone read the screenplay and composed the music on base. Later Leone has to realize the move on this compositions. And it worked well - music and movie were a unit. This one is from the soundtrack of Once Upon A Time In America a movie I really love.