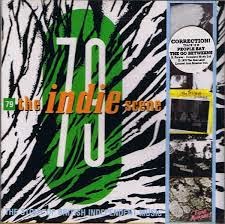 1979 seems like independent music has grown up. More and more influences ware taken over so that we have now a bigger musical spectrum. There are still the bands that play the rhythm and blues influenced new wave like The Rumour and Joy Division stuck deeply in their own fantastic sound. It was the year great pop songs were made by independent artists like Kristy McColl or Squeeze. Looking retrospective to this year I have to determine that it was the year electronic sound entered the indie stage. Fat Gadget or Cabaret Voltaire opened our ears for something different and new. It was also the year British kids discovered a type of music that was forgotten but still present in the shade: Two-Tone and Ska. Bands like the Specials, The Beat, The Selecter and Madness gave us the sound of the summer and The Jam weren't the only ones wearing suits any more. For me it was the year I had to do my military service. Almost a lost year staying away from my crowd and less money to buy records. It was also a time when I spent my leisure with five more guys in room listening mostly to Dire Straits, Pink Floyd's 'Wall' and ABBA or something else from the first Disco wave in Germany. Sometimes I got the chance to play one of my tapes and the result was still the same: offering them new music is like throwing pearls before swine. Anyway, here are some songs that might make you a happy start into the weekend.

Enjoy and have a good time

Walter I did my military service in your neighborhood. I was stationed in Schwetzingen outside of Heidelberg.

There was a U.S. military bar in Mannheim called the Pirates Cove. It was the "alternative" club and evidently had always been like...punk in the early 80's, Goth-new wave and so on...

I remember having to share speaker time with my buddies. There was one kid from Georgia who was obsessed with the Greatful Dead. Teeth grinding.

Walter, no Abba, Dire Straits or Pink Floyd? Shame on you! But I still enjoyed the songs you posted.
George

Loving this series, Walter, and this catchy quote:

"offering them new music is like throwing pearls before swine"

Brilliance all around today.

@ Eric: Schwetzingen is close to where my youngest brother lives and famous for their asparagus.

In my younger days I spent many times on posts close to Stuttgart - mostly when there was an event for German - American friendship. Nice time, nice dudes.