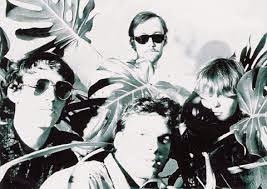 Shiny Gnomes were a Psychedelic/garage band from Nuremberg. They were called earlier than German "The Jesus and The Mary Chain". Their music connects psychedelic rock, the 60s beat and folk keen to experiment with the floating, ethereally active voice of the singer Limo. In a criticism her style became as a "wild garage sound between pop and experimental noise". Rolling Stone once written about them: "... the beaming Gnomes may keep to have put down at that time the probably most pioneering garage punk and Psychedelia album maggot in Germany. If the Farfisa organs whine, the guitars the melodies shreddern and the drummers behind his Kit hyperventilates, then the lift-off factor, measured in US icons lies like the 13th Floor Elevators or The Electric Prunes at least on the same height... Shine On, you crazy Gnomes." And I can't describe it in better words. The Shiny Gnomes could have made it big! Their technical abilities on the instruments and the composition gift absolutely corresponded to an international level. I saw them a few times live and it was always a big pleasure.