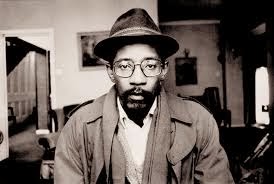 When I was  in 1979 some days in London was I have bought to myself at a market among the rest Linton Kwesi Johnsons's 'Forces of Victory' - one of my first reggae albums ever. I played it often these days and I bought his next record 'Bass Culture' as well. And this record is still a classic album of this time. I have to admit that I found access to him about listening to his music. The lyrics were very hard to understand for me. I played the songs from 'Bass Culture' often in our local pub when once an English friend of mine who worked as a waiter tapping beer asked me if I understand what he's singing. As I answered 'Nope, Sir' he told me about the meaning of his words. Because I now knew the contents of the songs I have easyly done myself to understand the single words. LKJ wrote the soundtrack to the street battles of the Thatcher's era. While The Clash sung "White Riot", LKJ describes what turned up in the black quarters of London of Notting Hill to Brixton. He is a socialist, is close to the Black Panther movement and fights in all fronts for the black Englishmen. For Him music is additional means to propagate his ideas. One of my favorites is his song 'Inglan Is A Bitch' in which he describes the everyday life of the Jamaican immigrants in London and their social mismanagement.

And as a bonus a fine remix of this song:

I didn't do A-levels immediately after leaving school, I did evening classes some years later instead. In my English A-level syllabus was a book of modern poetry and our tutor asked us to choose a poem, study it and discuss it in the next class. I chose 'Inglan Is A Bitch' by Linton Kwesi Johnson.

In the next class our tutor asked each of us to read our chosen poems aloud to the class. So there I was, trying to imitate the Jamaican patois that the poem was written in, sounding like a total wally! I wish I'd chosen something by Carol Ann Duffy instead!